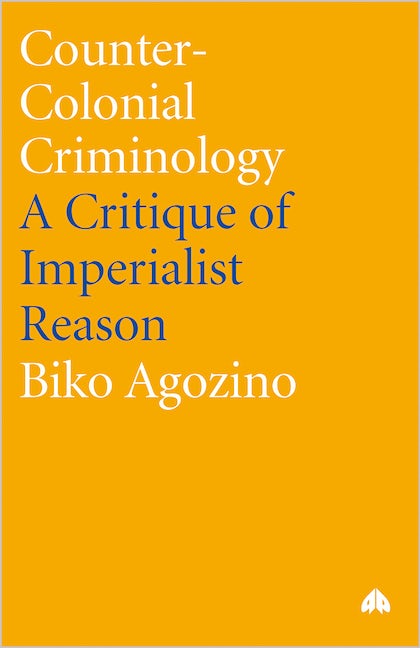 A Critique of Imperialist Reason

Biko Agozino considers African and other postcolonial literature and contributions to counter colonial criminology, their originality, relevance and limitations. Finally he advocates a 'committed objectivity' approach to race-class-gender criminology investigations in order to come to terms with imperialistic and neo-colonialist criminology.

Biko Agozino is professor of criminology at the University of West Indies. He is the author of Black Women and the Criminal Justice System (Ashgate, 1997), Counter-Colonial Criminology (Pluto, 2003), and editor of Theoretical and Methodological Issues in Migration Research (Ashgate, 2000).

'A dazzling body of scholarly work that will fertilise a lasting interest and sustainability of the development of African criminology' - Thoman S. Mosely, University of Maryland Eastern Shore
Acknowledgement
Table of contents
Introduction
1. The Enlightenment and Euro American Theories of the Judicial Process
2. From Determinism to Meaning: The Emergence of Labeling Perspective
3. From Societal Reaction to Questions of Power: From Labelling to Radical Criminology
4. Feminist Perspectives and Critical Criminology
5. Lesbian Rape: Maternal Metaphors for the Patriarchal State and International Conflict Resolution
6. Post-Structuralism and Positivism in Criminological Theory
7. Social Fiction Sui Generis: The Fairy Tale Structure of Criminological Theory
8. Executive lawlessness and the struggle for democracy in Africa
9. Radical Criminology In African Literature'
10. Committed Objectivity in Race-Class-Gender Research
11. How Scientific is Criminal Justice? A Methodological Critique of research on McCleskey V. Kemp and other capital cases.
12. What is Institutionalised? The Race-Class-Gender Articulation of Stephen Lawrence’
13. ‘Criminal Records: The Toughest, The Police and The Thieves; The Policing of Peter Tosh and Popular Culture'
Conclusion: Beyond Criminological Orientalism.
Bibliography
About The Author
Endonotes
Published by Pluto Press in Jun 2003
Paperback ISBN: 9780745318851