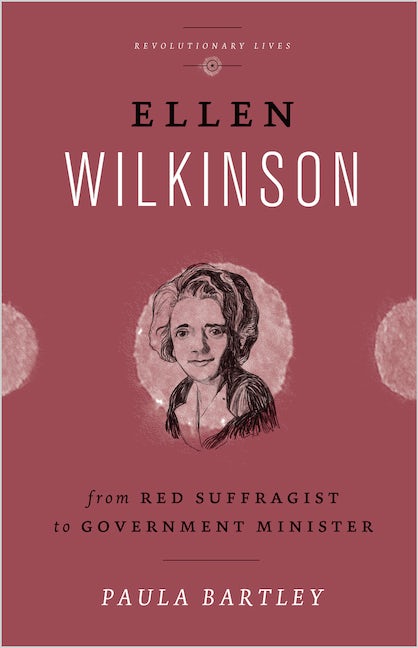 From Red Suffragist to Government Minister

Charts the life and career of notable socialist, suffragist and Labour government minister, Ellen Wilkinson.
Ellen Wilkinson was a key radical figure in the 20th century British socialist and feminist movement, a woman of passionate energy who was involved in most of the major struggles of her time.

Born in October 1891 into a working-class textile family, Wilkinson was involved in women's suffrage, helped found the British Communist Party, led the Labour Party's anti-fascist campaign, headed the iconic Jarrow Crusade and was the first female Minister of Education.

In this lively and engaging biography, Paula Bartley charts the political life of this extraordinary campaigner who went from street agitator to government minister whilst keeping her principles intact.

Paula Bartley is an independent scholar and former Senior Lecturer in History at the University of Wolverhampton. She is the author of Ellen Wilkinson (Pluto, 2014) Votes for Women (2007), Emmeline Pankhurst (2002) and The Changing Role of Women (1996). Her work has appeared in the American Historical Review, Social History, Midland History and Women's History Review.

'A passionate case for the relevance of 'Red Ellen' to the twenty-first century' - Karen Hunt, Professor of Modern British History, Keele University 'Paula Bartley shines a dazzling light on the life of 'Red' Ellen Wilkinson, a pioneering feminist and socialist Member of Parliament' - Diane Atkinson, author of 'The Criminal Conversation of Mrs Norton' 'Perfectly captures the essence of Ellen Wilkinson's unorthodox approach to politics. Paula Bartley's account of Ellen Wilkinson's passionate commitment to improve the lives of poor and vulnerable people will not fail to inspire' - Mark Fisher, former Labour MP for Stoke on Trent  'Clear, concise, and lively, and provides an interesting introductory insight into one of the lesser-known figures of the Labour Left' - Gordon Bannerman, LSE Review of Books 'Engaging and timely' - Cercles: Revue Pluridisciplinaire du Monde Anglophone
List of Illustrations
Acknowledgements
Preface
1. The Making of 'Red Ellen', 1891-1914
2. The First World War and Its Aftermath, 1914-24
3. On the Opposition Benches, 1924-29
4. In and Out of Power, 1929-35
5. Fighting Fascism and Imperialism in the 1930s
6. In Parliament Again, 1935-39
7. The Second World War, 1939-45
8. Post-War, 1945-47
Conclusion
Notes
Index
Published by Pluto Press in Feb 2014
Paperback ISBN: 9780745332376
eBook ISBN: 9781783710171

END_OF_DOCUMENT_TOKEN_TO_BE_REPLACED
Back to Top
X