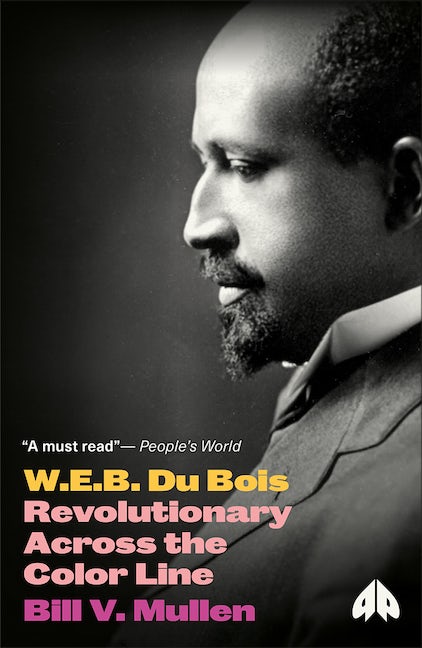 Revolutionary Across the Color Line

Accessible introduction to the life and times of one of the towering figures of the American Civil Rights movement
On the 27th August, 1963, the day before Martin Luther King electrified the world from the steps of the Lincoln Memorial with the immortal words, 'I Have a Dream', the life of another giant of the Civil Rights movement quietly drew to a close in Accra, Ghana: W.E.B. DuBois. In this new biography, Bill V. Mullen interprets the seismic political developments of the Twentieth Century through Du Bois’s revolutionary life.

Du Bois was born in Massachusetts in 1868, just three years after formal emancipation of America’s slaves. In his extraordinarily long and active political life, he would emerge as the first black man to earn a PhD from Harvard; surpass Booker T. Washington as the leading advocate for African American rights; co-found the NAACP, and involve himself in anti-imperialist and anti-colonial struggles across Asia and Africa. Beyond his Civil Rights work, Mullen also examines Du Bois's attitudes towards socialism, the USSR, China’s Communist Revolution, and the intersectional relationship between capitalism, poverty and racism.

An accessible introduction to a towering figure of American Civil Rights, perfect for anyone wanting to engage with Du Bois’s life and work.

'This is Marxist biography at its finest. W.E.B. Du Bois is the rare scholarly book that evokes the feeling that our own moment of radical challenge reverberates with the trials of another century, but Mullen proposes an internationalist perspective that re-enchants the story of this activist-intellectual with immediacy' - Alan Wald, H. Chandler Davis Collegiate Professor (Emeritus), University of Michigan, author of the American Literary Left Trilogy (UNC Press) 'Bill Mullen's illuminating biography is essential for understanding the political, personal, and intellectual challenges Du Bois faced in his lifetime search for a black revolutionary praxis' - Mary Helen Washington, Professor of English at the University of Maryland, author of The Other Blacklist: The African American Literary and Cultural Left of the 1950s (Columbia University Press, 2014) 'An accessible and valuable work' - Ron Jacobs, Counterpunch 'A must read for anyone interested in the life and work of this pioneering Black revolutionary' - People's World
Acknowledgements
Introduction: Revolutionary Lives Matter - Reclaiming W.E.B. Du Bois for Our Time
Part I: Racial Uplift and the Reform Era
1. Childhood, Youth and Education in an Age of Reform
2. Becoming a Scholar and Activist
3. Socialism, Activism and World War I
Part II: From Moscow to Manchester, 1917-45
4. Du Bois and the Russian Revolution
5. The Depression, Black Reconstruction, and Du Bois’s Asia Turn
6. Pan-Africanism or Communism?
Part III: Revolution and the Cold War, 1945-63
7. Wrestling with the Cold War, Stalinism and the Blacklist
8. The East is Red: Supporting Revolutions in Asia
9. Final Years, Exile, Death and Legacy
Notes
Bibliography
Index
Published by Pluto Press in Aug 2016
Paperback ISBN: 9780745335056
eBook ISBN: 9781783719662

END_OF_DOCUMENT_TOKEN_TO_BE_REPLACED
Back to Top
X