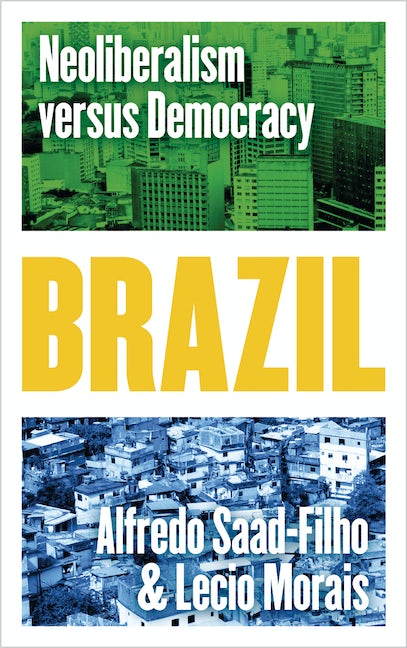 A political analysis of the paradox of modern-day Brazil, charting the political transition from military rule to democracy, and to neoliberalism.
Brazil is the world's sixth largest economy, has played a key role as one of the 'pink wave' administrations in Latin America, and was also responsible for wrecking the US-sponsored proposal for a Free Trade Area of the Americas. It is also one of the few large countries where social spending has risen and the distribution of income has improved in the last thirty years.

Alfredo Saad-Filho and Lecio Morais review the paradox that is modern-day Brazil. Focusing on the period from 1980 onwards, they analyse the tensions between the two systemic transitions to have dominated the country: the political transition from military rule to democracy, and to neoliberalism. The authors show how these transitions had contradictory logics and dynamics, yet ultimately became mutually supportive as they unfolded and intertwined.

Lecio Morais is economics adviser at the Lower House of the Brazilian Parliament. He has published widely on political economy, with a focus on Brazilian financial institutions. He is the author of Brazil (Pluto, 2017) and Anti-Capitalism (Pluto, 2002).

'Saad-Filho and Morais excel at providing a critical, powerful and persuasive analysis for Brazil's economic, social, and political development since the 1930s, emphasizing distinct transition paths from dictatorship to democracy and from state-led industrialization to neoliberalism. Grounded on a solid marxist political economy framework, this book is a must-read to understand Brazil's current predicament and defying challenges ahead' - Lena Lavinas, Professor of Welfare Economics at the Institute of Economics, Federal University of Rio de Janeiro 'The contradiction between neoliberalism and democracy is now well-known: this book offers a new and profound insight into this through a sharp and convincing account of the Brazilian experience... This is critical political economy at its best' - Jayati Ghosh, Professor of Economics at the Centre for Economics Studies and Planning, Jawaharlal University, New Delhi 'An excellent short history of Brazil’s economic, political and social development since the 1930s' - Socialist Review
Tables and Figures
Acknowledgements
Acronyms
Presidents of Brazil, 1930-2017
Preface
Introduction
1. A Troubled Path to Development
2. Building a Fragile Democracy
3. Inflation Stabilisation and the Transition to Neoliberalism
4. Impacts of Neoliberalism
5. Neoliberalism under the Workers’ Party
6. Developmental Neoliberalism and the PT
7. From Glory to Disaster
8. Class and Class Politics in Brazilian Neoliberalism
9. From the Confluence of Dissatisfactions to the Restoration of Neoliberalism
Conclusion: Crisis of Neoliberalism, Crisis of Democracy
Notes
References
Index
Published by Pluto Press in Dec 2017
Paperback ISBN: 9780745336701
eBook ISBN: 9781783717866