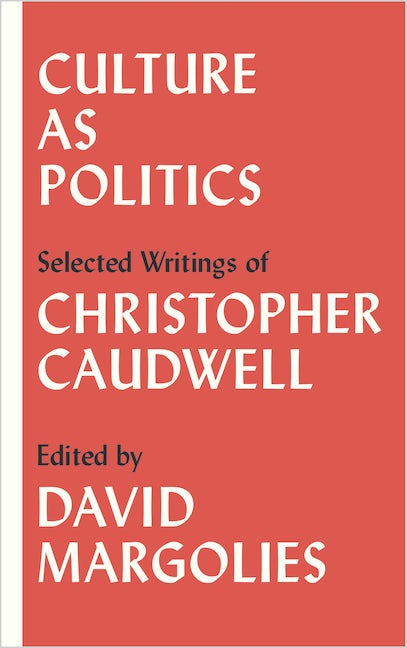 Considered by many to be the most innovative British Marxist writer of the twentieth century, Christopher Caudwell was killed in the Spanish Civil War at the age of 29. Although already a published writer of aeronautic texts and crime fiction, he was practically unknown to the public until reviews appeared of Illusion and Reality, which was published just after his death. A strikingly original study of poetry's role, it explained in clear language how the organising of emotion in society plays a part in social change and development.

Caudwell had a powerful interest in how things worked – aeronautics, physics, human psychology, language and society. In the anti-fascist struggles of the 1930s he saw that capitalism was a system that could not work properly and distorted the thinking of the age. Self-educated from the age of 15, he wrote with a directness that is quite alien to most cultural theory.

e as Politics introduces Caudwell's work through his most accessible and relevant writing. Material will be drawn from Illusion and Reality, Studies in a Dying Culture and his essay 'Heredity and Development'.

Christopher Caudwell (1907-1937) was the pen-name of Christopher St. John Sprigg, a British Marxist poet, writer and thinker. He joined the Communist Party in 1935, and soon became a dedicated grassroots activist, continuing his writing, even though none of his Marxist works were printed during his lifetime. In 1936, he left for Spain to join the International Brigades in the anti-fascist struggle against Franco. He was killed in the valley of Jarama, February 12th 1937, during his first day of battle. He is the author of the writings compiled in Culture as Politics (Pluto, 2017).

David Margolies is Emeritus Professor of English at Goldsmiths, University of London. He was the editor of the cultural politics journal Red Letters, edited Writing the Revolution: Cultural Criticism from Left Review (Pluto, 1998) and is the author of Shakespeare's Irrational Endings (Palgrave, 2012).

'It is not difficult to see Caudwell as a phenomenon - as an extraordinary shooting-star crossing England's empirical night' - E. P. Thompson

'The selection of writings presented here does justice to the richness of Caudwell's thought, and will introduce a whole new generation of readers to this remarkable thinker' - Anindya Raychaudhuri, School of English, University of St Andrews

'A revealing set of texts by the most important British Marxist cultural critic before World War II, meticulously and lovingly edited by the greatest contemporary expert in the field. Indispensable' - Edith Hall, Professor of Classics, King's College University of London

Christopher Caudwell was a brief and breathtakingly brilliant presence in the world ... I commend Pluto for publishing these new editions and bringing Caudwell to the attention of new audiences' - Marx & Philosophy Review of Books

Introduction
Part I: Studies in a Dying Culture
1. D. H. Lawrence: A Study of the Bourgeois Artist
2. Freud: A Study in Bourgeois Psychology
3. Liberty: A Study in Bourgeois Illusion
Part II: Illusion and Reality
4. The Birth of Poetry
5. The Death of Mythology
6. The Development of Modern Poetry
7. English Poets I: The Period of Primitive Accumulation
8. English Poets II: The Industrial Revolution
9. English Poets III: The Decline of Capitalism
10. The World and the ‘I’
Part III: 'Heredity and Development'
11. Heredity and Development: A Study of Bourgeois Biology
Notes
Works Cited
Index
Published by Pluto Press in Nov 2017
Paperback ISBN: 9780745337227
Hardcover ISBN: 9780745337234
eBook ISBN: 9781786801760