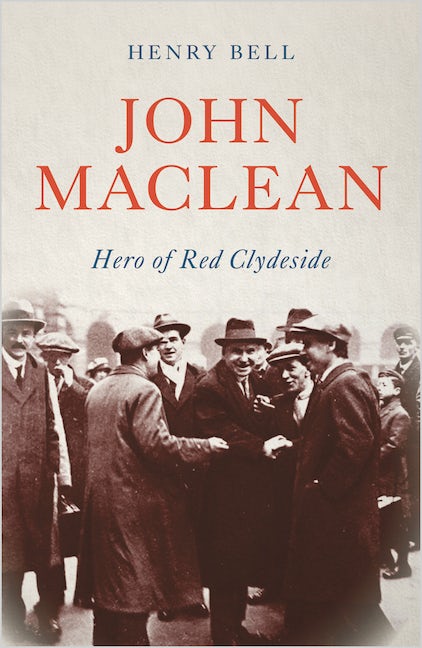 A literary biography of one of the early heroes of radical Scottish Independence.
'I am not here, then, as the accused; I am here as the accuser of capitalism dripping with blood from head to foot' – John Maclean, Speech from the Dock, 1918.

Feared by the government, adored by workers, celebrated by Lenin and Trotsky; the head of British Military Intelligence called John Maclean 'the most dangerous man in Britain'.

This new biography explores the events that shaped the life of a momentous man – from the Great War and the Great Unrest, to the Rent Strike and the Russian Revolution. It examines his work as an organiser and educator, his imprisonment and hunger strike, and how he became the early hero of radical Scottish Independence.

Henry Bell is a writer and editor from Bristol. He edits Gutter Magazine. He is the author of John Maclean: Hero of Red Clydeside (Pluto, 2018), and has edited books including A Bird is Not a Stone (Freight Books, 2014) and Tip Tap Flat (Freight Books, 2012).

Henry Bell is a writer and editor based in Glasgow. His biography of John Maclean (Pluto, 2018) was favourably reviewed in the London Review of Books, The List, the Morning Star and other publications. Bell is the managing editor of Gutter, Scotland’s magazine of new writing, and in 2019 he won a New Writers Award from the Scottish Book Trust. Bell's second poetry pamphlet is forthcoming from Stewed Rhubarb, and he has a book recording the pandemic, Still Life, out with Speculative Books in 2022. Bell has published work in Jacobin, The Daily Record, Open Democracy, Bella Caledonia, The Drouth, Glasgow Review of Books and Common Space.

'This is an extremely interesting and well-researched book – it provides a valuable insight into the life of one of Scotland’s most important, respected and influential political figures, whose legacy shines on today' - Nicola Sturgeon, First Minister of Scotland and leader of the Scottish National Party 'A beautifully structured and brilliantly written biography... Henry Bell's moving, evocative portrait of the complex man and his times is compelling and timely. It tells not just the story of the radical hero from the red Clyde, but a story of Scotland' - Jackie Kay, novelist and Makar, Scottish Poet Laureate 'John Maclean's swing towards the project of socialist independence for Scotland contains detailed lessons for today. Bell's biography tells the story of how a potter's son from the outskirts of Glasgow ended up schooling Lenin on the dynamics of class and nation' - Paul Mason, journalist and author 'A fine introduction to Scotland's most famous revolutionary. It acknowledges the power of the John Maclean legend but gives the facts from which that legend grew... and it reminds us of the tragic price that he and his family paid for his dedication to the cause of Marxist revolution' - James Robertson, novelist and poet 'There have been other biographies of John Maclean, but this clearly written narrative by Henry Bell sets a new standard in its careful balance and judicious conclusions. Maclean emerges from the pages of the book as a more complex figure than that depicted hitherto' - Sir Tom Devine, Professor Emeritus at The University of Edinburgh 'It is always good to see something new published about John Maclean. Since the Glasgow Labour Party retreated from Socialism it has done it's best to forget him... Scotland does not deserve its greatest people' - Alasdair Gray, writer and artist
Acknowledgements
List of Abbreviations
1. Out for Life and All That Life Can Give Us
2. Dispeller of Ignorance
3. The Revolutionary Gospel
4. The Rapids of Revolution
5. Internationalists First, Last, and All the Time
6. The War Within a War
7. Convict 2652
8. We are Going to Live to See the Day
9. Scotland's Bolshevik
10. The Accuser of Capitalism
11. Let's Kill Capitalism this Year
12. One Big Union
13. An Open Letter to Lenin
14. All Hail the Scottish Workers' Republic
15. The John Maclean March
Notes
Bibliography
Index
Published by Pluto Press in Oct 2018
Paperback ISBN: 9780745338385
eBook ISBN: 9781786803559

Feared by the government, celebrated by Lenin and Trotsky; the head of British Military Intelligence called John Maclean ‘the most dangerous man in Britain’. What we can learn from John Maclean?

END_OF_DOCUMENT_TOKEN_TO_BE_REPLACED
Back to Top
X