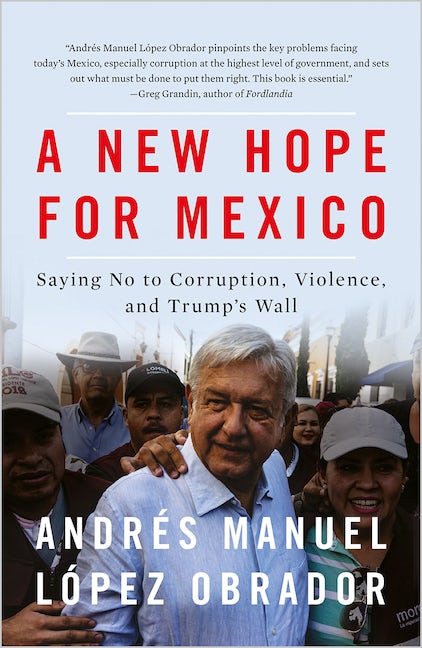 A New Hope for Mexico

Saying No to Corruption, Violence, and Trump's Wall

The newly elected left-wing President sets out his programme for a new Mexico.
On 1 July 2018, Andrés Manuel López Obrador was elected as the next President of Mexico. AMLO’s decisive victory speaks volumes about the corrupt state of the Mexican political elite, the temperament of the country’s people, and the election of another outspoken politician, Donald Trump.

A progressive politician often compared to Jeremy Corbyn and Bernie Sanders, AMLO’s campaign galvanised people across Mexico. Here, in his own words, AMLO paints a picture of a country plagued by cronyism and neoliberalism, and declares the dawn of a new era, vowing to uplift poor and indigenous communities and provide jobs and welfare for all. As Trump publicly derides the Mexican people as ‘drug dealers, criminals and rapists’, AMLO is critical of Mexico’s capitulation to the US.

The election of a true progressive for the first time in recent history has huge implications for the Mexican people, for the United States, and for the international progressive Left. This manifesto is the foundation on which a new progressive Latin American politics could emerge.

Andres Manuel Lopez Obrador is the newly elected president of Mexico. He worked as the Head of Government of the Federal District (Mexico City) from 2000 to 2005, before resigning to run as a candidate in the 2006 and 2012 presidential elections, representing a coalition led by the Party of the Democratic Revolution (PRD). He is today the leader and founder of the National Regeneration Movement (MORENA).

'Andres Manuel Lopez Obrador has a dream: to defeat the corruption, violence and injustice hiding behind the veil of Mexico's neoliberal experiment' - Yanis Varoufakis 'Andres Manuel Lopez Obrador pinpoints the key problems facing today's Mexico, especially corruption at the highest level of government, and sets out what must be done to put them right. This book is essential' - Greg Grandin, author of Fordlandia
Translator and Editor's Note
Introduction
1. A Gang of Thugs
2. Privatization is Theft
3. Voracious Nepotism
4. Killing the Goose that Lays the Golden Egg
5. White Collar Crime
6. Rescuing the State
7. Honesty is the Way Out
8. Republican Austerity
9. A Blueprint for Mexico's Economic and Social Revitalization
10. A Glimpse at 2024
Epilogue
About the Author
Published by Pluto Press in Oct 2018
Paperback ISBN: 9780745339535
eBook ISBN: 9781786804488

What Can We Expect from AMLO’s Presidency?

Looking at social issues, such as abortion, gender equality, LGBT rights, worker’s rights, what can we expect from AMLO, Mexico’s new left-populist President?

During the recent Mexican elections, Daniel Eltringham travelled to the country. In this blog, he explores the ascendancy of Andrés Manuel López Obrador, the anti-corruption candidate, which signals a sea-change for Mexican democracy.

John Holloway and Raquel Gutierrez reflect on the mood of hope in Mexico after the inauguration of President Andrés Manuel López Obrador (AMLO) on 1st December.

END_OF_DOCUMENT_TOKEN_TO_BE_REPLACED
Back to Top
X