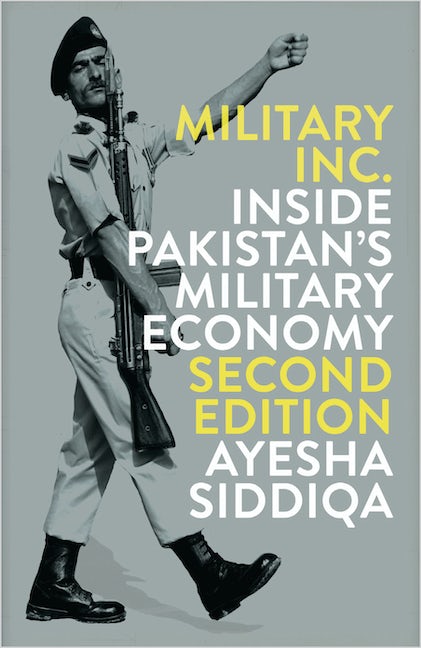 Dares to illuminate the shadowy workings of Pakistan's military industrial complex
Pakistan is a strategic ally of the US in the 'war on terror'. It is the third largest recipient of US aid in the world. Yet Pakistan is a state run by its army and intelligence service.

Operating in the shadows, Pakistan's military industrial complex owns and controls swathes of the economic and political landscape of the country. Military Inc. dares to illuminate the military as an oppressive holding company possessing not just security-related businesses, but also hotels, shopping malls, insurance companies, banks, farms and even an airline. The result is a deeply undemocratic society, where money is funnelled towards the military's economic enterprises, leaving those in need of it impoverished and effectively disenfranchised.

With an empirical richness, and a view to Pakistan's recent history, Ayesha Siddiqa offers a detailed and powerful case study of a global phenomenon: corruption, hollow economic growth and elitism.

This new edition includes a chapter on the recent developments of the military's foray into the media, and a new preface.

Ayesha Siddiqa is a research associate at the SOAS South Asia Institute. She is the author of Military Inc. (Pluto, 2016).

'Names names and pours cold water on boastful claims, may step on some powerful toes' - Guardian 'A detailed and powerful case study' - The New York Times 'This bold book explains why it will be so difficult to persuade the Pakistani military to renounce political power and return to the barracks. It is a must read for anyone who cares about Pakistan or its future' - Lee H. Hamilton, President and Director, Woodrow Wilson International Center for Scholars 'Siddiqa demonstrates [how] economic impunity and political impunity are closely related' - Nicole Ball, Senior Fellow, Center for International Policy, Washington DC 'No one else has so comprehensively [explained] the army's involvement in Pakistan's economy, nor linked it so clearly with the army's growing and seemingly permanent role in Pakistan's politics' - Stephen P. Cohen, Senior Fellow, Foreign Policy Studies, Brookings 'Complex, riveting, absorbing, Siddiqa has written a vitally important book which enhances our understanding of the army on the front line in the war on terror' - Ahmed Rashid, Far Eastern Economic Review 'An incisive look at the largely hidden economic empire run by and for the benefit of Pakistan's military. This courageous book will not please Pakistan's generals. But no Pakistani, civilian or military, can afford to ignore its sobering analysis' - Robert M. Hathaway, Director, Asia Program, Woodrow Wilson International Center for Scholars
List of Figures
List of Tables
List of Acronyms
Acknowledgements
Preface to the Second Edition
Introduction
1. Milbus: A Theoretical Concept
2. The Pakistan Military: The Development of Praetorianism, 1947-77
3. Evolution of the Military Class, 1977-2005
4. The Structure of Milbus
5. Milbus: The Formative Years, 1954-77
6. Expansion of Milbus, 1977-2005
7. The New Land Barons
8. Providing for the Men: Military Welfare
9. The Cost of Milbus
10. Milbus and the Future of Pakistan
Postscript to the Second Edition
11. From Military Government to Military Governance, 2007–16
12. From Military Inc. to Media Inc.
Notes
References
Index