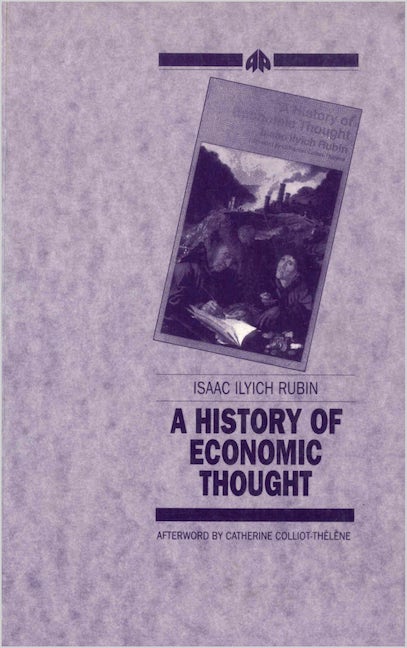 This is a selective reading of economic thought, offering analysis of those elements in past economics that accord with the areas of interest to Marxism. Each section gives a brief analysis of a specific school of thought, with particular attention to the social and ideological climate within which it evolved. The book differs from orthodox accounts in not merely mentioning historical background but using it as a central explanation of the evolution of economic theories.

As a counterpoint to Rubin, Catherine Colliot-Thelene has written a daring essay which locates a crucial flaw in the logical structure of Marx's Capital.

Isaac Ilych Rubin was born in Russia in 1886. He was an active participant in the Revolution and afterwards became a professor of marxist economics and a research assistant at the Marx-Engels Institute. He was arrested in 1930, apparently for having a close association with David Riazanov whom Stalin disliked. He was subsequently 'removed from among the living'.

Catherine Colliot-Thelene is a French philosopher