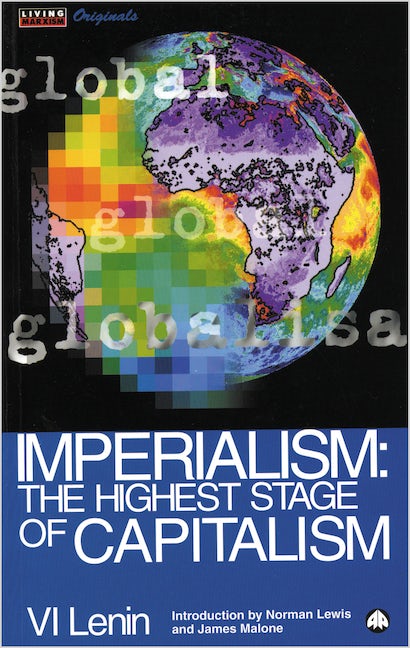 The Highest Stage of Capitalism

One of the most enduring of the Marxist classics
Globalisation is seen as a recent development, yet the trend towards this phenomenon was identified as long ago as 1916, in Lenin's now classic work Imperialism, he accounts for the increasing importance of the world market in the twentieth century.

The concept of imperialism lies at the very heart of Marxist analysis and debate and Lenin offers a prescient scenario of a world shaken by competitive instability, war and crisis, dominated by monopolies, the merging of finance and industrial capital, and fierce territorial competition. It’s relevance is now greater than ever.

V.I. Lenin (1870-1924) was a pivotal figure in twentieth century radical politics. He was a theoretician and the leader of the Russian Bolshevik Party. He wrote widely, authoring books such as Imperialism: The Highest Stage of Capitalism (Pluto, 1996). His selected writings were collected in the volume Revolution, Democracy, Socialism (Pluto, 2008).

Introduction
Preface to the Russian edition
Preface to the French and German editions
Imperialism: The Highest Form of Capitalism
1. Concentration of production and monopolies
2. The banks and their new role
3. Finance capital and financial oligarchy
4. The export of capital
5. The division of the world among capitalist combines
6. The division of the world among the great powers
7. Imperialism as a special stage of capitalism
8. The parasitism and decay of capitalism
9. The critique of imperialism
10. The place of imperialism in history
Published by Pluto Press in Jun 1996
Paperback ISBN: 9780745310350