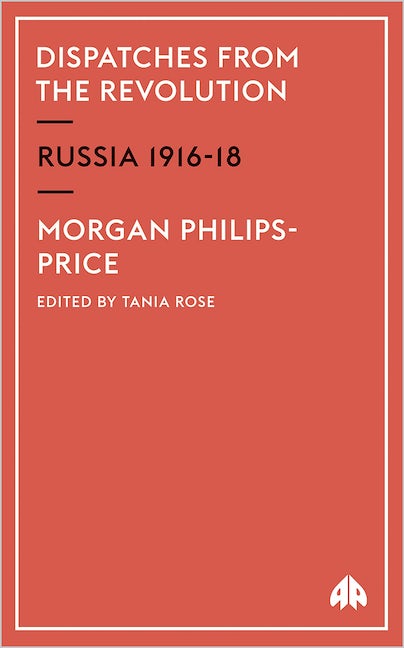 Dispatches From the Revolution

His remarkable writings provide a firsthand account of the momentous events, and include his meetings with Lenin and the Bolshevik leaders.

Morgan Philips-Price's writings for the Manchester Guardian won him wide acclaim. During his long career he also reported for the Daily Herald, Izvestia and the New York Herald Tribune and authored several books including A Diplomatic History of the War 1914; War and Revolution in Asiatic Russia (1918) and Dispatches from the Weimar Republic.

Tania Rose was the daughter of Morgan Philips-Price and collaborated on screenplays for Ealing Studios as well as the Oscar-winning Guess Who’s Coming to Dinner.

'An extraordinarily valuable compilation' - Eric Hobsbawm 'Price was a man with an instinctive feel for politics. He was better placed than most reporters to understand the depth of popular desire for change' - Jonathan Steele, The Guardian 'A vivid account and complimentary to Reed's masterpiece Ten Days That Shook the World ... This fascinating book is an excellent insight to the revolutionary events of 1917-18, and how they transformed a young upper-class liberal into a fervent revolutionary' - Socialist Appeal
Foreword - Eric Hosbawm
Introduction
Notes on Russian Political Parties, 1880-1918
1. Russia in 1915-16
2. The Eve of the Revolution
3. The March Revolution
4. The Provisional Government, April-August 1917
5. The Interregnum, August-November 1917
6. The November Revolution
7. November 1917-February 1918
8. After Brest-Litovsk, March-August 1918
9. The Allied Intervention, August 1918
Epilogue
Biographical Notes
Notes and References
Bibliography
Index
Published by Pluto Press in Jul 1997
Paperback ISBN: 9780745312057