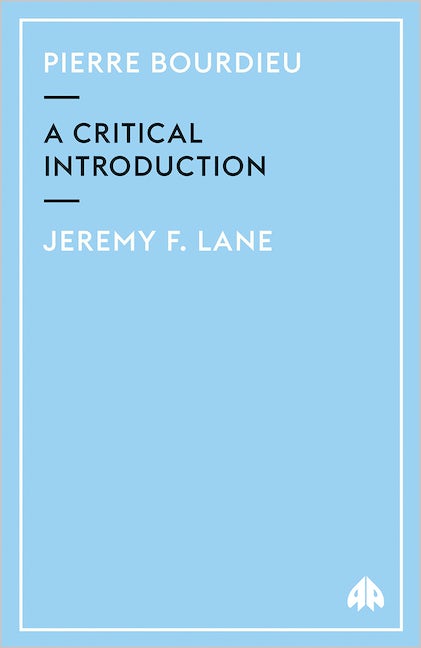 A new major critical introduction to Bourdieu, looking at the full range of his work in its historical and intellectual context
'This beautifully written and lucidly argued study is the most persuasive account of Bourdieu's work yet to be published. Lane illuminates much that can puzzle a foreign readership by expertly situating Bourdieu within a French context. At the same time he points to those aspects of Bourdieu's writing which are of particular relevance to contemporary debates on questions of citizenship and globalisation. He gives a fascinating account of Bourdieu's astonishingly prescient analyses of the impact of the expansion of higher education, the influence of the mass media, the growth of the culture industries, and the changing nature of political and social elites, not just in France, but in the western world.' - Professor Jill Forbes, Queen Mary and Westfield, University of London

Jeremy F. Lane is the Associate Professor in French and Francophone Studies at the University of Nottingham. He is the author of Bourdieu's Politics (Routledge, 2012) and Pierre Bourdieu (Pluto Press, 2000).

'This beautifully written and lucidly argued study is the most persuasive account of Bourdieu's work yet to be published' - Professor Jill Forbes, Queen Mary and Westfield, University of London
Introduction
1. Peasants into Revolutionaries?
2. Frenchmen into Consumers?
3. Universities
4. Returning to Kabylia
5. Anthropology and Sociology
6. Old Wine, Distinctive New Bottles
7. Neo-Liberalism and the Defence of the ‘Universal’
Conclusion
Notes and References
Bibliography
Index
Published by Pluto Press in Jul 2000
Paperback ISBN: 9780745315010
eBook ISBN: 9781783718603