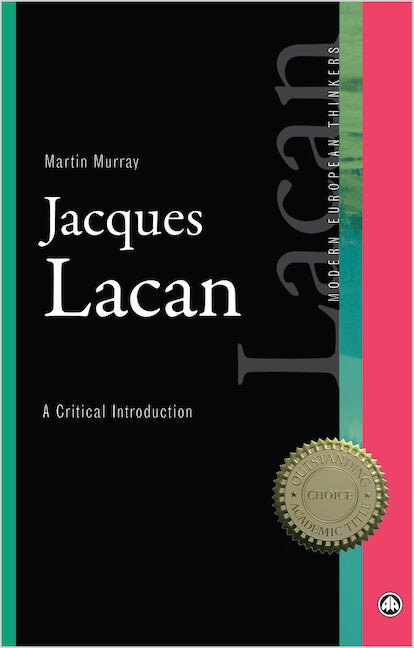 An accessible, sharp and contemporary introduction to Lacan and his work

The wide-ranging and brilliant ideas of the French psychoanalyst Jacques Lacan (1901-1981) have had a major influence on modern thought. His 'followers' are loyal and legion. Yet his ideas are complex and densely conveyed. Lacan's detractors have accused him of obscurantism, pretentiousness and even incoherence, his psychoanalytic practice and his personal life were complicated - he was famous and contentious in equal measure.

Martin Murray provides a lucid account of Lacan's key concepts, including the mirror stage, and his relationship to Freud's ideas, amongst many others. Tracing their origins in his diverse interests: art, psychiatry, philosophy, anthropology, linguistics and psychoanalysis. Murray also investigates Lacan's professional life, personal life and institutional influence in an attempt to understand the charismatic and controversial person he became.

Martin Murray is the Head of Creative Industries in the School of Computing and Digital Media. at London Metropolitan University. He is the author of Jacques Lacan: A Critical Introduction (Pluto, 2015).

'Martin Murray talks 'about Lacan' in a way that nobody has before: he explains in crystal clear, easily understandable language not just what the notoriously opaque Lacan's ideas were 'about', but also the various shaping forces -- personal, historical, cultural, ideological, artistic'

'With extraordinary intellectual generosity (and some humour), he forges a form of psychoanalytic sensibility that is vitalised, not exhausted, by the dazzle and difficulty of its subject'

'This book deserves a space on the shelves of even those who have already amassed a significant number of introductions to Lacanian thought ... Essential'

Acknowledgements
1. Stopping and Starting
2. Sweet and Sour
3. Sense and Nonsense
4. Man and Window
5. I and I
6. Fight and Flight
7. Word and Wish
8. Ending and Beginning
Notes
Bibliography of Works by Lacan
General Bibliography
Index