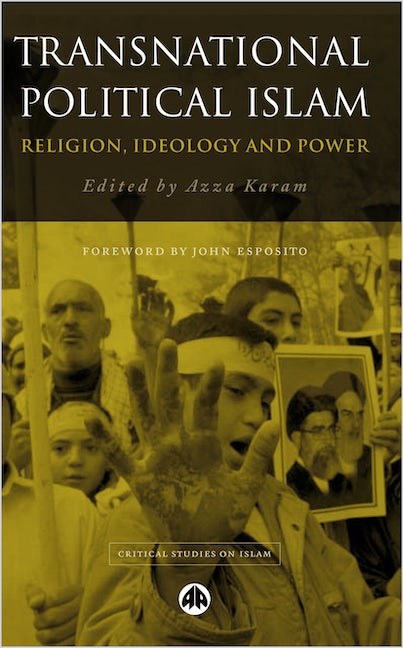 How Islamist thinking and practice relates to the latest global political and economic trends
Political Islam, to be distinguished from Islam as a culture or a religion, and from Islamic Fundamentalism, is an increasingly important feature of the western political scene. The ideologies of Political Islam reflect the fact that some of their adherents live and work within a Western socio-political context.

With a range of outstanding contributors that includes academics and human rights advocates this book tackles the diversity of Islamist thinking and practice in various Western countries and explores their transnational connections in both East and West.

The book analyses developments in Islamist thinking and activities, and their connections to the latest global political and economic trends, and discusses future evolutions of the ideology and its manifestations.

Azza Karam serves as the senior advisor on culture at the United Nations Population Fund (UNFPA). She is the author of Transnational Political Islam (Pluto Press, 2004) and Islamisms, Women and the State (Palgrave Macmillan, 1998).

'A very stimulating study that successfully and productively combines a discourse analysis approach with socio-political investigation of the world situation after September 11th' - Prof. Dr. Nasr H. Abu Zayd, Islamic Studies, Leiden University This is a solid selection of original articles, including several unique case studies on Muslims and politics in Europe. In contrast to the usual fare, which is all too often a mile wide and an inch deep, these are solid, serious, and provocative pieces that open new vistas of understanding and ask novel questions. This is precisely the collection of new pieces that the informed reader will want in hand as he or she grapples with understanding Political Islam as a transnational phenomenon. - Augustus Richard Norton, Professor, Boston University 'Presents a unique insight into the relations between political Islam or Islamism in the Muslim world and its links within the western world. Rather than the simplistic notion of Islamism as terrorism, the authors of this collection argue for a more profound and subtle understanding of the intersection between religion and politics. This volume is a must for students of Islam and politics' - Prof. Jorgen S. Nielsen - Prof. of Islamic Studies and Director, Graduate Institute for Theology and Religion University of Birmingham
Acknowledgements
Foreword by John Esposito
1. Transnational Political Islam: An Introduction by Azza Karam, World Conference of Religions for Peace (WCRP), USA.
2. Restructuring Political Islam: Transnational Belonging and Muslims in
France and Germany by Valerie Amiraux, Centre national de la Recherche Scientifique (CNRS) and Centre Universitaire de Recherche Administrative et Politique de Picardie (CURAPP), France.
3. Political Islam in Sweden: Integration and Deterrence by Jan Hjärpe, University of Lund, Sweden.
4. Islam in the Netherlands: Traveling Under the Shadow of the World Trade
Center by Jan Nederveen Pieterse, University of Urbana Champaign, USA.
5. Cognac, Cigarettes and Terrorist Cells in Albania by Fred Abrahams, Human Rights Watch, USA.
6. Exploring Theoretical and Programmatic Changes in Contemporary Islamist
Discourse: Al-Manar Al-Jadid in Egypt by Amr Hamzawy, Free University of Berlin, Germany.
About the Contributors
Index
Published by Pluto Press in Nov 2003
Paperback ISBN: 9780745316253