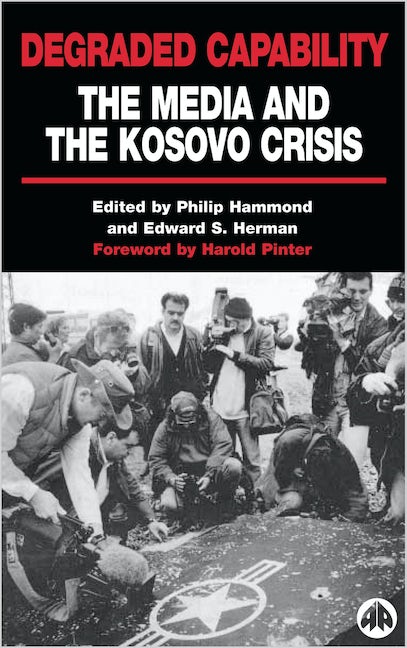 The Media and the Kosovo Crisis

How is war reported?
The media served a highly partisan and propagandistic role in Nato’s Kosovo war, uncritically reproducing official spin in a way that was incompatible with their proclaimed democratic role as objective purveyors of information. Degraded Capability integrates a critical interpretation of Western policy toward the former Yugoslavia with analysis of media coverage of the Kosovo crisis and war.

The first part of the book deals with the war itself and the build-up to it, placing this in the context of earlier Western intervention in Yugoslavia. Part two discusses key issues raised by the media coverage, including the demonisation of the enemy, and the role of CNN. In the final section, contributors analyse how the war was reported in different countries around the world, including the United States, Britain, Germany, India, Greece, Russia, and France.

The book is an important corrective to the hysteria and misinformation that permeated media coverage. Subjects covered include the role of the internet, the changing media-military relationship, the depiction and definition of ‘war crimes,’ and how Yugoslav television was presented as a legitimate military target.

Philip Hammond is senior lecturer in Media Studies at South Bank University. He has written on media coverage and the Kosovo war for the Independent and The Times.

'This extraordinary volume provides a comprehensive analysis of the role of the media is advancing NATO's Kosovo war' - Robert W. McChesney, Associate Professor, Institute of Communications Research, University of Illinois at Urbana-Champaign
Foreword by Harold Pinter
Introduction by Philip Hammond and Edward S. Herman
Part One: The West’s Destruction of Yugoslavia
1. Nato and the New World Order: Ideals and Self-interest by Diana Johnstone
2. Western Intervention and the Disintegration of Yugoslavia, 1989-1999 by David Chandler
3. War Crimes by Mirjana Skoco and William Woodger
4. The War and its Aftermath by Peter Gowan
Part Two: Seeing the Enemy
5. New Militarism and the Manufacture of Warfare by Richard Keeble
6. Nazifying the Serbs, from Bosnia to Kosovo by Mick Hume
7. The Military and the Media by Mirjana Skoco and
William Woodger
8. Symbolic Warfare: Nato vs. the Serbian Media by Goran Gocic
Part Three: Reporting the War around the World
9. Following Washington’s Script: The United States Media and Kosovo by Seth Ackerman and Jim Naureckas
10. CNN: Selling Nato’s War Globally by Edward S. Herman and David Peterson
11. Third Way War: New Labour, the British Media and Kosovo by Philip Hammond
12. Censorship by Omission by John Pilger
13. The French Media and the Kosovo War by Diana Johnstone
14. From ‘Never again War’ to ‘Never again Auschwitz’: Dilemmas of German Media Policy in the War against Yugoslavia by Thomas Deichmann
15. ‘Thank you God! Thank you Norway!’ Norwegian Newspapers and the Kosovo War by Karin Trandheim Røn
16. The Greek ‘Participation’ in Kosovo by Nikos Raptis
17. Consensus and Conflict in the Russian Press by Philip Hammond, Lilia Nizamova and Irina Saveliyeva
18. India by Raju Thomas and Siddharth Varadarajan
Conclusions: First Casualty and Beyond by Philip Hammond and Edward S. Herman
References
Contributors
Index
Published by Pluto Press in May 2000
Paperback ISBN: 9780745316314