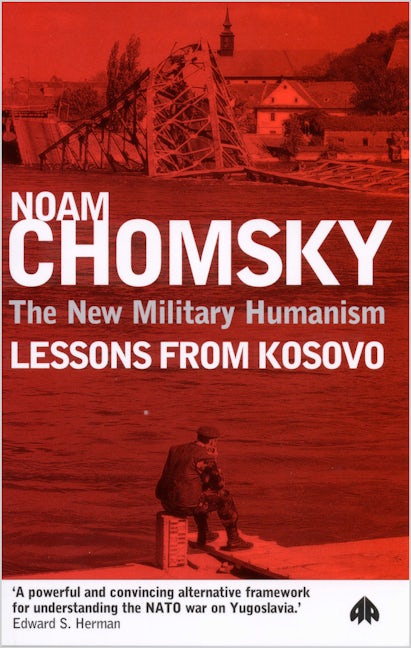 A brilliant and revealing analysis of the Kosovo crisis

The crisis in Kosovo has excited passion and visionary exaltation of a kind rarely witnessed. The events have been portrayed as a 'new humanism', timed fortuitously with a new millennium, which will displace the crass and narrow interest politics of a mean-spirited past.

But is this new humanism guided by power interests or by humanitarian concern? Is the resort to force undertaken 'in the name of principles and values', as professed? Or are we witnessing something more crass and familiar?

The New Military Humanism is Chomsky at his best: a brilliant and revealing analysis, offering lessons for us all and sounding a clear alarm which none should ignore.

'Thank God for Noam Chomsky ... Ruthless in his analysis of Nato's lies, relentless in his emphasis on the parallels between Kosovo, Central America and Turkey, he believes that this year's bombardment of Serbia undermines what is left of international law' - Robert Fisk, Independent

'A powerful and convincing alternative framework for understanding the NATO war on Yugoslavia' - Edward S. Herman

1. In the name of principles and values
2. Before the bombing
3. Assessing Humanitarian Intent
The Racak massacre defining atrocity
Defining humanitarian concerns in the 90s: a small sample
4. The denial syndrome
5. The diplomatic record
6. Why force
7. World order and its rules
Index
Published by Pluto Press in Oct 1999
Paperback ISBN: 9780745316338