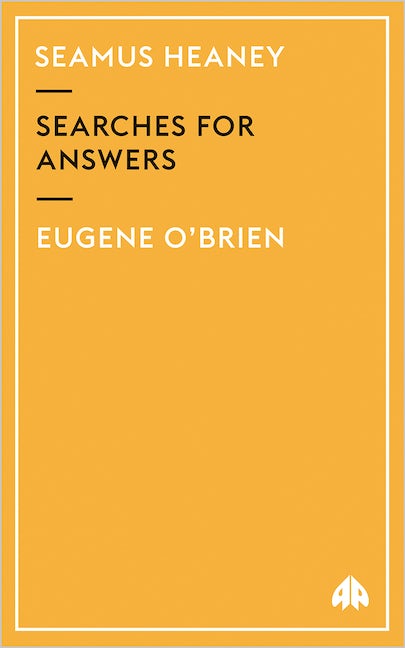 A central strand of this study is an exploration of Heaney's ethical and political project with respect to issues of Irish identity as outlined in his writings. This work suggests that there are analogies between Heaney's political and ethical thought, and that of Jacques Derrida, Maurice Blanchot and Emmanuel Levinas.

Each chapter concentrates on a single theme: his sense of the aesthetic, and its role in terms of politics and ethics; his relationship with politics as a contemporary situation; his notion of place, both as a given, and as something that could be reimagined; his enunciation of a sense of visceral identity; his concept of ethics in terms of a relationship between selfhood and alterity; his notion of the many threads which combine to produce a sense of Irishness.

Finally, the Nobel lectures of Yeats and Heaney are examined in order to trace the complex relationship between these two writers.

Eugene O'Brien is Head of the English Language & Literature department at Mary Immaculate College, University of Limerick. He is the author of Seamus Heaney and the Place of Writing (Pluto Press, 2003).

'Explores Heaney's aeshetics, politics, language, myth, ethics, identity and notions of being Irish as these aspects show themselves in his poetry, prose and translations' - Ireland of the Welcomes
Acknowledgements
Introduction
1. ‘Preoccupying Questions’: Heaney’s Prose
2. ‘Continuous Adjudication’: Binary Oppositions and the Field of Force
3. ‘Writing in the Sand’: Poetry and Transformation
4. ‘Surviving Amphibiously’: Poetry and Politics
5. ‘A Bright Nowhere’: The Deconstruction of Place
6. ‘Through-Otherness’: The Deconstruction of Language
7. Nobel Causes: Heaney and Yeats
Conclusion
Works Cited
Index
Published by Pluto Press in Oct 2003
Paperback ISBN: 9780745317342