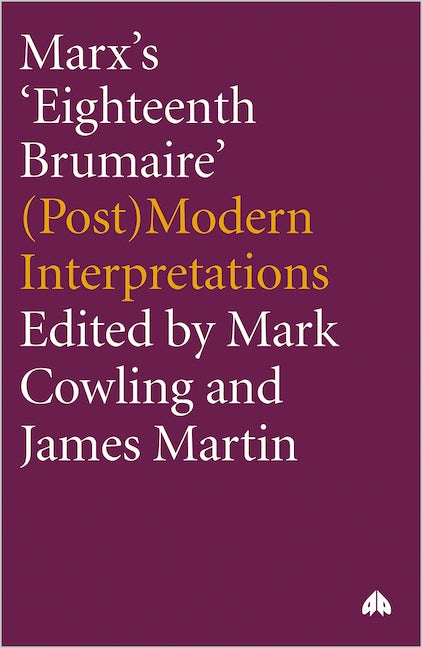 An acclaimed translation of one of Marx's most important texts, along with essays discussing its contemporary relevance.
Marx's account of the rise of Louis-Napoleon Bonaparte is one of his most important texts. Written after the defeat of the 1848 revolution in France and Bonaparte's subsequent coup, it is a concrete analysis that raises enduring theoretical questions about the state, class conflict and ideology.

Unlike his earlier analyses, Marx develops a nuanced argument concerning the independence of the state from class interests, the different types of classes, and the determining power of ideas and imagery in politics. In the Eighteenth Brumaire he applies his 'materialist conception of history' to an actual historical event with extraordinary subtlety and an impressive, powerful command of language.

This volume contains the most recent and widely acclaimed translation of the Eighteenth Brumaire by Terrell Carver, together with a series of specially commissioned essays on the importance of the Brumaire in Marx's canon. Contributors discuss its continuing significance and interest, the historical background and its contemporary relevance for political philosophy and history.

Mark Cowling is a Principal Lecturer in Criminology at the University of Teesside. He is co-editor of Marx's 'Eighteenth Brumaire': (Post)Modern Interpretations (Pluto, 2002) and Marxism, the Millennium and Beyond (St. Martin's Press, 2000).