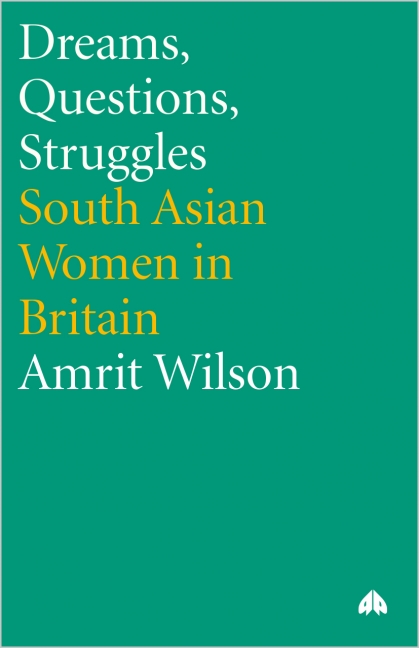 These are the lives and struggles of British Asian women
From schoolgirls to matriarchs, single mothers to extended families, and businesswomen to factory workers, the experience of Asian women in Britain today is polarised by class and religion.

This book explores the lives and struggles of two generations of British Asian women to present a political account of their experiences: personal and public, individual and collective, their struggles take on power structures within the family, the community and, on occasion, the British state.

Combining their personal testimony within a theoretical framework, Amrit Wilson locates their experiences in the wider context of global and regional politics. She examines what impact the feminist movement has had on their lives, and explores issues such as domestic violence, Asian marriages, representations of Asian women, mental disturbance and suicide.

Amrit Wilson was Senior Lecturer in Women's Studies/South Asian Studies at Luton University. She set up the first Asian women's refuge in London and works with 'Asian Women Unite'. She is author of Finding A Voice (Virago, 1978), which won the Martin Luther King award, and has written about black experiences in Britain, the politics of South Asia and gender issues. She is the author of Dreams, Questions, Struggles (Pluto, 2006) and The Threat of Liberation (Pluto, 2013).

'At a time when Asian women are only being discussed in terms of their veils, forced marriages and oppressive religion, what a relief it is to read a book about Asian women as agents not objects' - Institute of Race Relations 'Amrit Wilson does not let anyone off the hook ... This book will be of supreme interest to activists and those working with or for South Asian women in the voluntary sector or community projects' - Ursula Sharma, The Journal of Contemporary South Asia 'This is a captivating book which will influence many people's perceptions of Asian women's lives. An essential reference book for anyone interested in issues of gender, race, culture, migration, disaspora, and identity' - Aisha Gill, Roehampton University 'Wilson is an activist who has long dealt with the knottiest issues of gender and race in officially multi-cultured Britain. Each of the three words in the book's title is like a bell that tolls dismally for each of us' - The Times of India
1. Introduction
2. The new ‘good woman’: reconstructing patriarchal control
3. A thing of beauty and a boy forever – changing masculinities
4. ‘Mercy and Wisdom of a government’? Race, Culture and Immigration Control
5. Making a spectacle of oneself –South Asian weddings in Britain
6. Psychiatry, violence and mental distress
7. Contesting (mis)representations
8. Still fighting for justice –low-paid workers in a global market
9. Dreams, questions and struggles – reflections on a movement
Notes
Bibliography
Index
Published by Pluto Press in Feb 2006
Paperback ISBN: 9780745318479