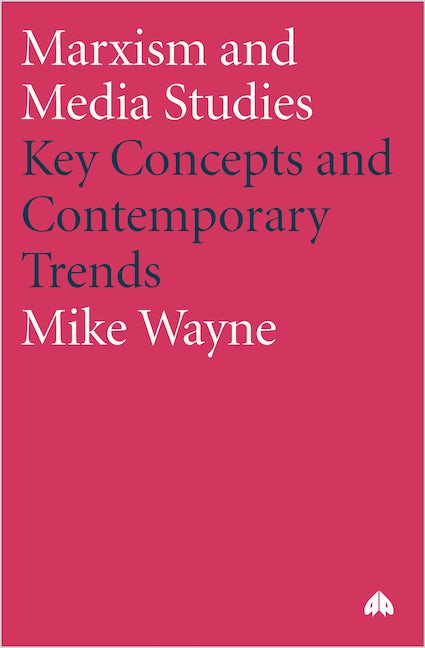 A guide about how Marxist theory can illuminate media studies.
This is an accessible guide to key Marxist concepts and how to apply them to contemporary cultural analysis.

Drawing on Marx, Lukacs, Gramsci, Habermas, Jameson and others, the book retools and redeems key concepts such as class, the mode of production, culture industries, the state, base-superstructure, ideology, hegemony, knowledge and social interests, and commodity fetishism. It also includes analysis of film, television, the internet and print media. Using case studies including Disney, Big Brother to the spirits and spectres in such films as The Others, The Devil's Backbone and Dark City, it illuminates the fetishisms of culture and society under capital.

Exploring the relevance of each concept to understanding the media, Wayne explains why Marxism is an important critical methodology for the media student to engage with. He foregrounds the theoretical and political shifts that have led to its marginalisation in recent years, and highlights how and why these trends are changing as once more, people return to Marx and Marxism to understand the world around them.

Preface: From the small screen to the big picture.
1. Class and Creative Labour.
2. Mode of Production: Technology and New Media.
3. The Powers of Capital: Hollywood’s Media-Industrial Complex.
4. The State.
5. Base and Superstructure: Reconstructing the Political Unconscious.
6. Signs, Ideology and Hegemony.
7. Commodity Fetishism and Reification: The World Made Spectral.
8. Knowledge, Norms and Social Interests: Dilemmas for Documentary.
9. Conclusion: Reflections on Key Concepts and Contemporary Trends.
Bibliography
Index
Published by Pluto Press in Jul 2003
Paperback ISBN: 9780745319131
eBook ISBN: 9781783716258