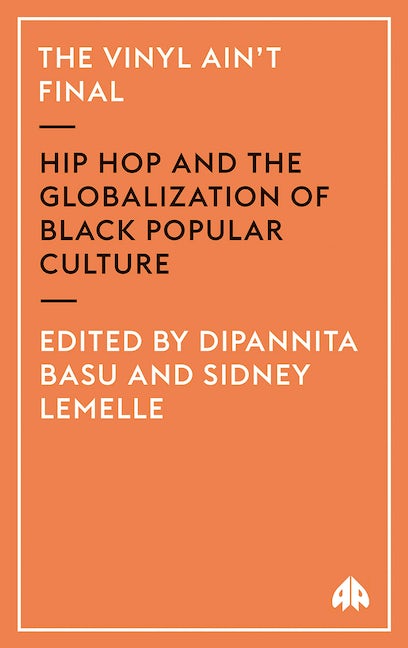 Hip Hop and the Globalization of Black Popular Culture

Explores the impact of hip hop on culture worldwide.

From the front lines of hip hop culture and music in the USA, Britain, France, Japan, Germany, Hawaii, Tanzania, Cuba, Samoa and South Africa, academics, poets, practitioners, journalists, and political commentators explore hip hop -- both as a culture and as a commodity.

From the political economy of the South African music industry to the cultural resistance forged by Afro-Asian hip hop, this potent mix of contributors provides a unique critical insight into the implications of hip hop globally and locally.

Indispensable for fans of hip hop culture and music, this book will also appeal to anyone interested in cultural production, cultural politics and the implications of the huge variety of forms hip hop encompasses.

Dipa Basu is Associate Professor of Sociology and Black Studies at Pitzer College, Claremont, California. She is the editor of The Vinyl Ain't Final: Hip Hop and the Globalization of Black Popular Culture (Pluto, 2006) and author of The Politics of Social Science Research: Race, Ethnicity and Social Change (Palgrave Press, 2001).

Sidney Lemelle is an Associate Professor of Black Studies at Pomona College, Claremont, California. He is co-editor of The Vinyl Ain't Final: Hip Hop and the Globalization of Black Popular Culture (Pluto, 2006).

Foreword by Robin D.G. Kelley
Introduction by Dipannita Basu and Sidney Lemelle
SIDE ONE: RAP AND HIP HOP IN THE US
1. ‘For the People,’ ‘TRIBUTE,’ and ‘REDBONE.’ by Umar Bin Hassan
2. A Rap Thing,’ ‘On Rapping Rap.’ and ‘For Mario: Homeland and Hip Hop,’ by Mumia Abu-Jamal
3. Hip Hop: As a Culture and Generation by Dipannita Basu
4. Nobody Knows My Name and an interview with the Director Rachel Raimist: A Female Hip Hop Film Maker by Dipannita Basu and Laura Harris
5. From Azeem to Zion-I: The Evolution of Global Consciousness in Bay Area Hip Hop by Eric K. Arnold
6. Head Rush: Hip Hop and a Hawaiian Nation ‘On the Rise.’ by Adria L. Imada
7. War At 33 1/3: Culture and Politics Across the Afro-Asian Atlantic. by Sohail Daulatzai
SIDE TWO: RAP AND HIP HOP GOES GLOBAL
8. Deathening Silence: The Terms of (Non) Political Commentary Rap by John Hutnyk
9. 'Keeping it Real’ in a Different ‘Hood: African-Americanization and Hip Hop in Germany by Tim Brown
10. Africa on Their Mind: Rap, Blackness and Citizenship in France by Veronique Helenon
11. Cuban Hip Hop: Underground Revolution by Annelise Wunderlich
12. Between Our Islands We Dance: Hip Hop and the Samoan Diaspora by April K. Henderson
13. Negotiating Ethnicity and Authenticity in Tokyo’s Club Harlem by Rhiannon Fink
14. Globalization and Gangster Rap: Hip Hop in the Post Apartheid City by Zine Magubane
15. 'Ni Wapi Tunakwenda’: Hip Hop Culture and The Children of Arusha by Sidney J.Lemelle
Notes
About the Contributors
Index