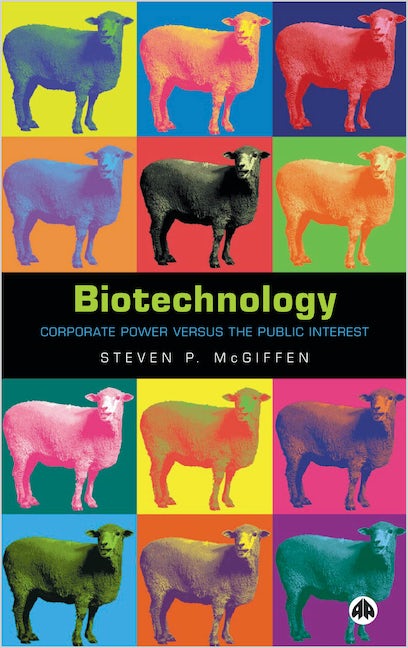 Corporate Power Versus the Public Interest

Do corporations own the genetic codes to our future? McGiffen explores who's in control and what it means.
Frankenfoods, designer babies, Dolly the Sheep and Raelian fantasists: few subjects generate as much controversy and misinformation as biotechnology. This book takes the reader behind the headlines to examine the new laws on genetic-based technologies, who's making them, and why.

Steven P. McGiffen offers a lucid analysis of the real implications of biotechnology legislation in the US and the EU, and contrasts it with approaches to agricultural and medical biotech in the rest of the world. He argues that the EU and America are removing decision-making power from the people and their elected representatives. Biotechnology regulation is a local manifestation of a global process of transferring power: from the people to corporations, from poor countries to rich ones, from the public to the private.

He shows that biotechnology demands effective and democratic international decision-making procedures - and that we are very far from achieving them. This is an indispensable guide for activists and anyone who wants to know more about how to control biotech regulation and how to resist handing control of our future to corporations.

Steven P. McGiffen was a writer and translator based at the American Graduate School in Paris. He worked for the United Left Group in the European Parliament, as an advisor to the Socialist Party of the Netherlands and as editor of Spectre. He is the author of Biotechnology, Poisoned Spring and The European Union.

'An expert yet accessible overview of the regulation of biotechnology, its champions and its detractors' - Caroline Lucas, Green Party MP for Brighton Pavilion
Introduction
1. The European Union
2. The United States
3. Other Developed Countries
4. Developing Countries
Glossary of terms and abbreviations
Index
Published by Pluto Press in Mar 2005
Paperback ISBN: 9780745319742