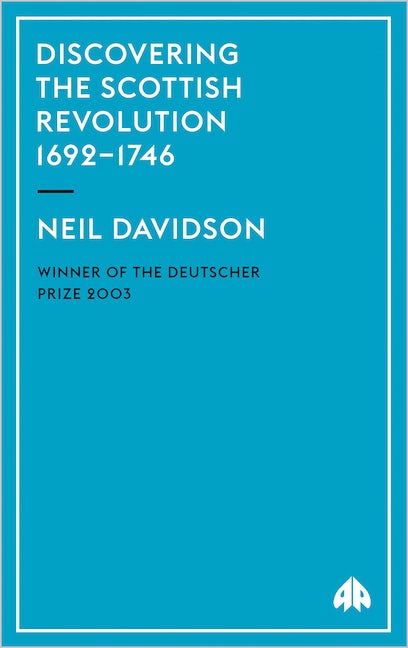 *Winner of the the Deutscher Memorial Prize 2003*

This book is a reassessment of Scottish politics and society in the late seventeenth and early eighteenth century. Neil Davidson argues that Scotland experienced a revolution during this period that has rarely been recognised in the existing historiography.

Davidson explores the political and economic changes of these years, revealing how social and economic power was transferred from one class to another. He describes how Scotland was transformed from a backward and feudal economy to a new centre of emergent capitalism.

He traces the economic and social crisis that led to Scotland's incorporation into the Union in 1707, but argues that the Union did not lead to the transformation of Scottish society. The decisive period was instead the aftermath of the last Jacobite revolt in 1746, whose failure was integral to the survival and consolidation of British, and ultimately global capitalism.

Neil Davidson lectured in Sociology with the School of Social and Political Sciences at the University of Glasgow. He wrote several books on Scottish nationalism, including Discovering the Scottish Revolution 1692-1746 (Pluto Press, 2003) and The Origins of Scottish Nationhood (Pluto Press, 2000).

Preface and Acknowledgements
Introduction
1. Scotland After 1688
2. Three Dimensions of Socio-Economic Crisis: the 1690s
3. From Hanoverian Succession to Incorporating Union, 1700-1707
4. Scotland and the British State: From Crisis to Consolidation, 1708-1716
5. Agricultural Improvement and Social Transformation, 1716-1744
6. The End of the British Revolution, 1745-1746
Conclusion
Appendix: Marx and Engels on Scotland
Bibliographical Essay
Notes and References