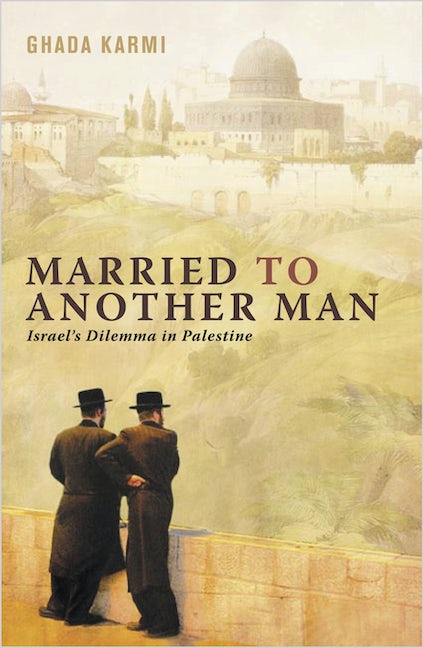 Married to Another Man

Celebrated author Ghada Karmi argues that the only practical solution to the conflict is for Palestinians and Israelis to live together in a secular democratic state
Two rabbis, visiting Palestine in 1897, observed that the land was like a bride, 'beautiful, but married to another man'. By which they meant that, if a place was to be found for Israel in Palestine, where would the people of Palestine go? This is a dilemma that Israel has never been able to resolve.

No conflict today is more dangerous than that between Israel and the Palestinians. The implications it has for regional and global security cannot be overstated. The peace process as we know it is dead and no solution is in sight. Nor, as this book argues, will that change until everyone involved in finding a solution accepts the real causes of conflict, and its consequences on the ground.

Leading writer Ghada Karmi explains in fascinating detail the difficulties Israel's existence created for the Arab world and why the search for a solution has been so elusive. Ultimately, she argues that the conflict will end only once the needs of both Arabs and Israelis are accommodated equally. Her startling conclusions overturn conventional thinking - but they are hard to refute.

Ghada Karmi is a research fellow and lecturer at the Institute of Arab and Islamic Studies, University of Exeter. From 1999 to 2001 she was an Associate Fellow of the Royal Institute of International Affairs, where she led a major project on Israel-Palestinian reconciliation. In 2009, she became a Fellow of the Royal Society of Arts. She is the author of In Search of Fatima (Verso, 2004), Married to Another Man (Pluto, 2007) and Return (Verso, 2015).

'Ghada Karmi's storytelling eloquence is celebrated. Now the sheer power and sense of her analysis throws down a challenge to those who claim the 'problem' of Israel and Palestine cannot be solved. She shows it can' - John Pilger 'The demise of the two-state solution makes Ghada Karmi's work a compelling read. Her book is well-written and extraordinarily honest. Her bold vision of a single egalitarian state for Palestinians and Israelis is the only way to break the current log jam and bring an end to Apartheid Israel' - Dr Nur Masalha, Reader in Religion and Politics, Director of the Centre for Religion and  History and of the Holy Land Research Project, St Mary's University College, University of Surrey 'Ghada Karmi's direct and incisive prose is a welcome contribution to a field overburdened. The book introduces in the most convincing manner the merit of the one state solution as a settlement that would benefit all concerned: the Palestinians wherever they are, the Israelis and the Middle East as a whole' - Ilan Pappe, author of A History of Modern Palestine: One Land, Two Peoples 'Karmi, one of our most renowned commentators on the Isreali-Palestinian conflict, has some startling ideas and conclusions in this fascinating book' - Hampstead and Highgate Express
Preface
Introduction
1. The Cost of Israel to the Arabs
2. Why Do Jews Support Israel?
3. Why Does the West Support Israel?
4. The 'Peace Process'
5. Destroying the Palestinians
6. Solving the Problem
7. The One-State Solution
Epilogue: The End of the Zionist Dream
Bibliography
Index
Published by Pluto Press in May 2007
Paperback ISBN: 9780745320656
eBook ISBN: 9781783714346