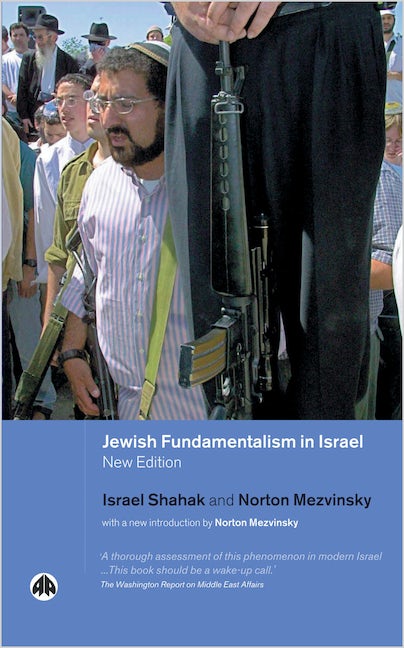 by Israel Shahak and Norton Mezvinsky

New edition of bestseller that critiques Jewish fundamentalism and shows its negative impact on Israeli policy.
This is a new edition of a classic and highly controversial book that examines the history and consequences of Jewish Fundamentalism in Israel. It is essential reading for anyone who wants a full understanding of the way religious extremism has affected the political development of the modern Israeli state.

Acclaimed writer and human rights campaigner Israel Shahak was, up until his death in 2001, one of the most respected of Israel's peace activists – he was, in the words of Gore Vidal, 'the latest - if not the last - of the great prophets.' Written by Shahak together with American scholar Norton Mezvinsky, this books shows how Jewish fundamentalism in Israel, as shown in the activities of religious settlers, is of great political importance.

The authors trace the history and development of Jewish fundamentalism. They place the assassination of Prime Minister Rabin in the context of what they see as a tradition of punishments and killings of those Jews perceived to be heretics. They conclude that Jewish fundamentalism is essentially hostile to democracy.

Norton Mezvinsky is Professor of History at Central Connecticut State University. He is the co-author of Jewish Fundamentalism in Israel (Pluto Press, 1999).