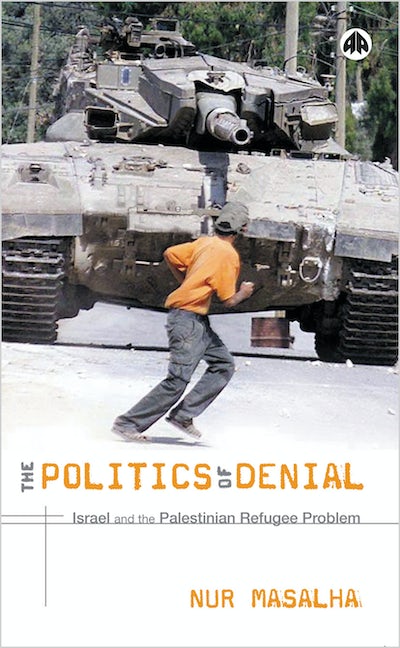 The Politics of Denial

Israel and the Palestinian Refugee Problem

The largest and most enduring refugee problem in the world

Since 1948 Israeli refugee policy has become a classic case of denial: the denial that Zionist 'transfer committees' had operated between 1937 and 1948; denial of any wrong doing or any historical injustice; denial of the 'right of return'; denial of restitution of property and compensation; and indeed denial of any moral responsibility or culpability for the creation of the refugee problem.

This book analyses Israeli policies towards the Palestinian refugees as they evolved from the 1948 catastrophe (or nakba) to the present. It is the first volume to look in detail at Israeli law and policy surrounding the refugee question. Drawing on extensive primary sources and previously classified archive material, Masalha discusses the 1948 exodus; Israeli resettlement schemes since 1948; Israeli approaches to compensation and restitution of property; Israeli refugee policies towards the internally displaced ('present absentees'); and Israeli refugee policies during the Madrid and Oslo negotiations.

Nur Masalha is Palestinian Historian and Director of the Centre for Religion and History at St. Mary's University. He is the author of many books on Palestine-Israel, including The Palestine Nakba (Zed, 2014), The Politics of Denial (Pluto Press, 2003) and Imperial Israel and the Palestinians (Pluto Press, 2000).

'Provides the detailed evidence and arguments explaining why the grassroots, and their supporters, are firmly saying no' - The Daily Star

Acknowledgements
Introduction
1. The Palestinian Nakba: Zionism, ‘Transfer’ and the 1948 Exodus
2. Israel’s ‘New Historians’ and the Nakba: A Critique of Zionist Discourse
3. ‘If You Can’t Solve it, Dissolve it’: Israeli Resettlement Schemes Since 1948
4. Israeli Approaches to Restitution of Property and Compensation (1948-1956)
5. The ‘Present Absentees’ and their Legal Struggle: Evolving Israeli
Policies Towards the Internally Displaced (1948-2003)
6. The 1967 Refugee Exodus
7. Israeli Refugee Policies During Negotiations: From Madrid to Taba (October 1991-January 2001)
Epilogue
Bibliography
Index
Published by Pluto Press in Oct 2003
Paperback ISBN: 9780745321202