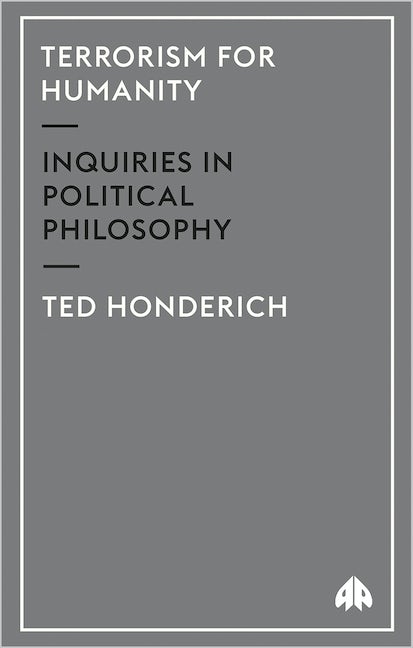 New edition of classic title on the morality of terrorism
This book raises important questions about the uses and ethics of political violence - questions that are all the more pertinent in the light of recent events and the 'war on terror'.

What can be said for and against terrorism and political violence? When is such terrorism right, if it ever is, and when is it wrong? Ted Honderich challenges the presuppositions, inconsistencies and prejudices of liberal-democratic thinking. He tackles such emotive subjects as the IRA, the PLO and the ANC, arguing the importance of understanding the justification for political violence in all manifestations.

Exploring the moral issues that lie at the heart of these difficult questions, Honderich reminds us that political philosophy should be an attempt to inquire with an open mind - and that to open one's mind is not necessarily to lose one's convictions.

Ted Honderich is Grote is Professor Emeritus at University College London and author of numerous books on philosophy including After the Terror (EUP, 2002), How Free Are You? (OUP, 2001), editor of The Philosophers (OUP, 2001) and Conservatism (Pluto, 2005).

'Clear, rational and continuously interesting' - New Statesman 'A masterful argument' - Times Literary Supplement 'Inherent interest and importance' - Times Higher Educational
Introduction
1. Wretchedness and Terrorism, and Differences We Make Between Them
2. A Theory of Justice, an Anarchism, and the Obligation to Obey the Law
3. The Principle of Humanity
4. Our Omissions and their Terrorism
5. On Democratic Terrorism
6. Doctrines, Commitments, and Four Conclusions about Terrorism for Humanity
Acknowledgements
Index
Published by Pluto Press in Nov 2003
Paperback ISBN: 9780745321332