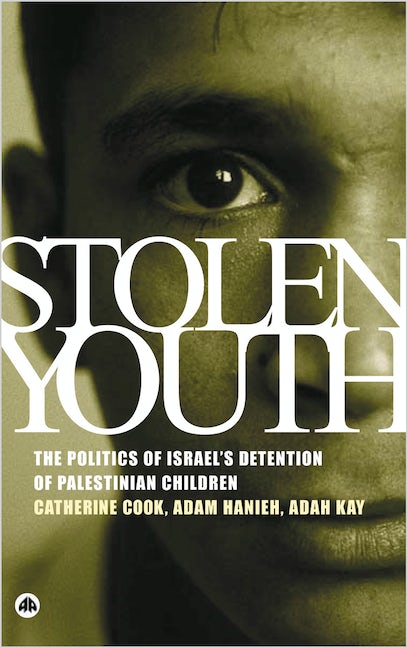 The Politics of Israel's Detention of Palestinian Children

First in-depth account of how Israel imprisons Palestinian children, which is part of an overall strategy of political domination.
Stolen Youth is the first book to explore Israel's incarceration of Palestinian children. Based on first-hand information from international human rights groups and NGO workers in the West Bank and Gaza Strip, it also features interviews with children who have been imprisoned. The result is a disturbing and often shocking account of the abuses that are being carried out by Israel.

The book presents a critical analysis of the international legal framework and the UN system, arguing that a major failure of these instuitutions is their appeal to neutrality while ignoring the reality of power. The book attempts to address the inadequacy of these institutions by placing the issue of Palestinian child prisoners within the framework of Israeli strategy and the overall system of control.

Stolen Youth outlines Israel's system of institutionalized discrimination and state torture, challenges the legitimacy of Israel's 'security' argument, and argues that Israel's treatment of Palestinian detainees forms one pillar of a policy designed to quash resistance to the occupation.

Catherine Cook is Senior Analyst and Media Coordinator for the Middle East Research and Information Project. She is the former DCI/PS International Advocacy Coordinator (1999-2002).

Adam Hanieh is Senior Lecturer in Development Studies at the School of Oriental and African Studies, University of London. He is editor of Transit States (Pluto, 2014), author of Capitalism and Class in the Gulf Arab States (2011) and Lineages of Revolt: Issues of Contemporary Capitalism in the Middle East (2013).

Adah Kay was Honorary Visiting Professor at Cass Business School, City University, London. An anthropologist and urban planner, she worked in local government, universities and UK NGOs. During 2002-6 she lived and worked in the West Bank. She was the co-author of Stolen Youth: The Politics of Israel’s Detention of Palestinian Children (Pluto, 2004).

'A remarkable testament of how evil can become routinised, and of the impact of the Palestinian-Israeli conflict on one of the most vulnerable segments of Palestinian society' - Rashid Khalidi, Edward Said Professor of Arab Studies, Middle East Institute, Columbia University 'No other book has concentrated so clearly on the issue of Palestinian children in this context and it provides a chilling insight into childhood as experienced by Palestinians' - Peace News 'The first book ever totally devoted to the subject of Israel's imprisonment of Palestinians under the age of 18, and it covers the issue meticulously, yet concisely' - The Jordan Times 'Meticulously documented and carefully researched, it is crystal clear and truly damning indictment of an abominable practice' - Znet 'A crucial informative synopsis of an issue that has been regrettably neglected for a long time and for that reason deserves to be read.' - Cairo Times
Foreword
Glossary
1. Introduction
2. The Political Context
3. Israel’s System Of Control
4. International Law And Child Detention
5. Arrest And Transfer
6. Interrogation And Detention
7. Imprisonment
8. From Institutional Discrimination To State-Sanctioned Violence
9. Psychological And Social Impacts Of Prison And Torture
10. Myths And Politics- The Foundation Of Israel’s Impunity
11. Conclusion
Notes
Index
Published by Pluto Press in Jan 2004
Paperback ISBN: 9780745321615