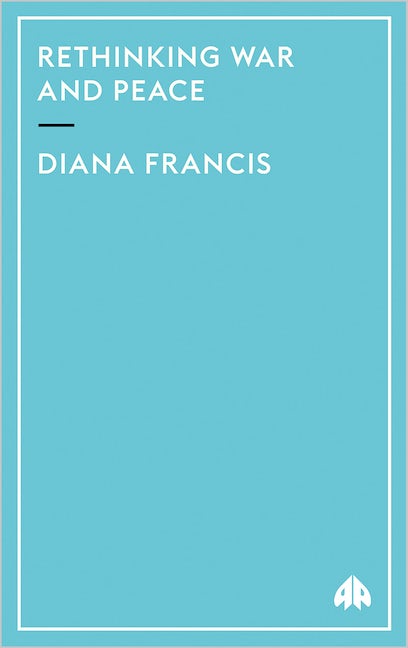 An entirely modern argument for the irrelevance of war as a goal in international affairs.
Is war ever a just way to resolve conflict? Diana Francis argues that it is not. With passion and eloquence, she mounts a head-on challenge to the belief that war as an institution is either necessary or effective for good.

Refuting the notion that human nature condemns us to perpetual carnage, she argues that we can change the ways we think and the systems we live by. In a tightly reasoned discussion of the ethics of war and peace she asserts that war is a gross denial of the core values on which peace depends, and that the Just War Theory has failed and deceived us.

The book explores alternative ways of confronting aggression and injustice, showing that these are neglected but well proven. Francis argues that our security can be enhanced by recognition of our shared responsibility for each other and our planet. Practical solutions require a new level of participation in public affairs. Recent events have shown that this is possible. Francis outlines the steps we must take to bring about the radical shift so urgently needed.

Diana Francis is former President of the International Fellowship of Reconciliation and Chair of the Committee for Conflict Transformation Support. She is the author of From Pacification to Peacebuilding (Pluto, 2010), Rethinking War and Peace (Pluto, 2004) and People, Peace and Power (Pluto, 2002).

'Nothing is more urgent than the transformation of the anti-war movement into a pro-peace movement. We need an agenda that sets out the alternatives to war that the peace movement can commit to. Rethinking War and Peace offers an outline of where we can begin this process' - Alan Simpson, MP, UK Chair of Labour Against the War 'A timely and necessary book. It explodes the myth of war's inevitability' - Martin Bell, OBE, journalist and former Independent MP 'A most useful and inspiring book' - Naomi Goodman, former president of the Jewish Peace Fellowship 'This is the right book at the right time. The non-violent resolution of international conflict is no longer just desirable -- it has become essential' - Bruce Kent, Chair of the Movement for the Abolition of War and Vice President of CND 'This well researched and persuasively argued book presents an alternative to the logic and spirit of war' - Samuel Kobia, General Secretary of the World Council of Churches 'It will come as a surprise to some people but peacemaking requires passion as well as empathy. An overdue pacifist polemic' - Howard Clark, War Resisters' International council member
Acknowledgements
Introduction
1 Where are we?
Events and realities
Presentation and perceptions
2 What is war good for? Myth and reality
The myth of war
War’s causes
War leaders and their motivations
‘Exhausted alternatives’: the case of Kosovo
War’s efficacy for good
The negative effects of war
Conclusion
3 War, violence and human nature
Power as domination
Violent structures
Us and them
Violence and human nature
The role of culture
Gender and violence
Nature and nurture: changing gender roles
Broader possibilities of cultural change
Psychology and moral development
4 Peace, war and ethics
Ethics, self and society
Ethics and war
Ethics and power
The logic (and illogic) of war
War as justice
Just war theories
The protection of civilians – sliding boundaries
Means and ends: consequentialism
Measuring wider consequences
Sins of omission
Accepting responsibility
Strengthening peace ethics
5 Opposing evil and standing up for good
What about Hitler?
Tyranny and ‘people power’
Nonviolent resistance in recent history
People-power around the world
The strength of nonviolence – building peace
International solidarity
A constructive role for governments in supporting peace ‘abroad’
An answer to terrorism?
People-power to resist militarism and demand peace
6 Peace, identity and participation
From identity to identification
Purposes and values
Participation
Achieving change
7 Time for action
What needs to be done and why
Getting on with the job
Reasons for hope
Notes and References
Index
Published by Pluto Press in May 2004
Paperback ISBN: 9780745321875
eBook ISBN: 9781783719365