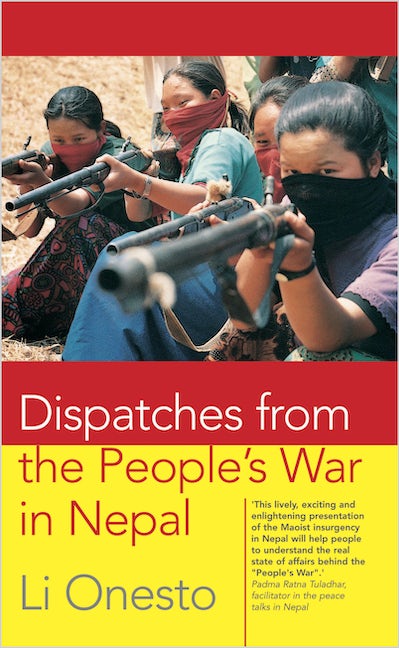 Dispatches From the People's War in Nepal

Lively and enlightening presentation of the Maoist insurgency in Nepal, educating people on the real state of affairs behind the "People's War".
A Maoist revolution has been raging in Nepal since 1996. In 1999, Li Onesto became the first foreign journalist to travel deep into the guerrilla zones. Allowed unprecedented access, she interviewed political leaders, guerrilla fighters, villagers in areas under Maoist control, and relatives of those killed by government forces.

Millions in Nepal now live in areas under guerrilla control. Peasants are running grass-roots institutions, exercising what they call 'people's power'. Li Onesto describes these transformations -- the establishment of new governing committees and courts, the confiscation and re-division of land, new cultural and social practices, and the emergence of a new outlook.

Increasingly, the UK and US have directly intervened to provide political and military support to the counter-insurgency efforts of the Nepalese regime. Onesto analyzes this in the context of the broader international situation and the 'war on terrorism'.

As a correspondent for the Revolutionary Worker newspaper, Li Onesto was the first foreign journalist to travel deep into the guerrilla zones of Nepal in 1999. Her interview with Prachanda, the head of the Communist Party of Nepal (Maoist), has been circulated internationally – translated into Nepali, Spanish, Italian, French, Hindi, German, Pashtun (in Afghanistan), and Chinese. Onesto's photography show, "The People's War in Nepal: Faces from a Hidden War" has been on display in several cities in the U.S. and she continues to study, write and lecture about the developing situation in Nepal.

'Invaluable background to the world's most vigorous Maoist movement, and insight into the theory and practice underlying contemporary Maoism elsewhere in South Asia and globally' - Gary Leupp, professor of history at Tufts University and Coordinator of the Asian Studies Program 'Probably the best, if not only, account of how the Maoists built their organisation and movement, and of how they operate and govern' - Stephen Mikesell, author of Class, State and Struggle in Nepal: Writings 1989-1995 'This is a lively, exciting and enlightening presentation of the true portrait of the Maoist insurgency in Nepal' - Padma Ratna Tuladhar, independent left leader, senior human rights leader and one of the facilitators in the peace talks between His Majesty’s Government of Nepal and the Communist Party of Nepal (Maoist)
Acknowledgements
Map
Preface:1996-2004: Eight Years of People’s War in Nepal
Introduction
1. Meeting the People’s Army
2. Villages of Resistance
3. The Raid on Bethan
4. Rifles and a Vision
5. Revolutionary Work in the City
6. General Strike in Kathmandu
Carrying the Story Forward: The Problem of Disinformation
7. Land in the Middle
8. Hope of the Hopeless in Gorkha
9. Preparing the Ground in the West
10. Learning Warfare by Waging Warfare in the West
Carrying the Story Forward: Revolutionary Policies
11. People’s Power in Rolpa
12. Guns, Drums, and Keyboards
13. Teachers in a School of War
Carrying the Story Forward: Children in the War Zone
14. Martyrs of Rolpa
15. Families of Martyrs: Turning Grief into Strength
Carrying the Story Forward: The Rising Death Toll
16. Women Warriors
17. New Women, New People’s Power
Carrying the Story Forward: The Fight for Women Leaders
18. Magar Liberation
19. Preparing for War in Rukum
20. Starting and Sustaining People’s War in Rukum
21. Camping with the People’s Army
22. Red Salute in the West
Notes
References
Index
Published by Pluto Press in Nov 2004
Paperback ISBN: 9780745323404