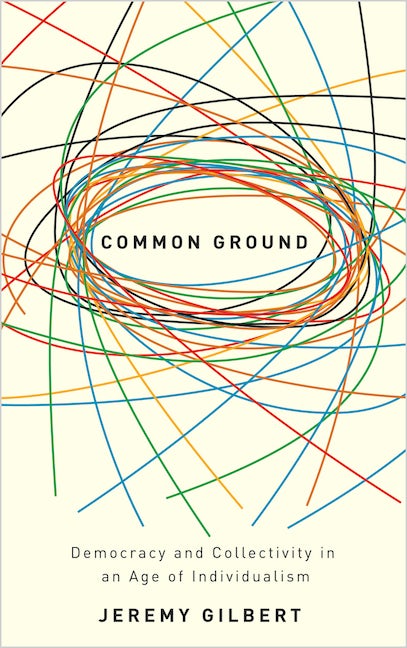 Democracy and Collectivity in an Age of Individualism

Draws on past philosophical debates to propose a new way of conceiving the commons in today's neo-liberal era.
Under neoliberalism the cult of individualism reigns supreme, forced upon us through culture, media and politics, it fatally limits our capacity to escape the current crisis of democratic politics. In Common Ground, Jeremy Gilbert asks us to reimagine the philosophical relationship between individuality, collectivity, affect and agency, proposing a radically non-individualist mode of imagining social life.

The book considers how opponents of neoliberal hegemony, and of the individualist tradition in Western thought, might protect collective creativity and democratic possibility. Examination of the historical roots of individualism's 'Leviathan logic' and fresh readings of theorists such as Hobbes, Lazzarato, Simondon, Lyotard, Laclau and Deleuze and Guattari, force us to confront longstanding assumptions about the nature of the individual and of collectivity. Exploration of this fundamental faultline in contemporary politics is accompanied by analysis of the different ideas and practices of collectivity, from conservative notions of hierarchical and patriarchal communities to the politics of 'horizontality' and 'the commons' which lie at the heart of radical movements today. Through an understanding of the philosophy shaping contemporary relations and disrupting hegemonic values, we can re-imagine the present moment.

Jeremy Gilbert is Professor of Cultural and Political Theory at the University of East London and editor of the journal New Formations. He is widely known as a theorist and political commentator, writing for both academic and general audiences. He is the author of Common Ground (Pluto, 2013).Gilbert writes regularly for outlets such New Statesman, OpenDemocracy and the Guardian.

'A bold, brilliant and ultimately hopeful attempt to build a critique of liberalism and neoliberalism on different foundations' - William Davies, Goldsmiths 'A serious and courageous engagement with the deepest issue of our time. Humanity cannot go on as we are, but how do we change course? Gilbert starts to build a strategy from the wreckage' - Anthony Barnett, founder of openDemocracy 'We live in an interregnum. The old is not yet dead and the new is yet to be born. No one understands this moment better than Jeremy Gilbert.' - Neal Lawson, Chair for Compass 'The task of a philosophy of relation, of a transindividual philosophy, is not just to assert the reality of relations, but to understand how those very relations individuate us. Gilbert's book is an important contribution to such a project' - Jason Read, The New Inquiry 'Addresses the most urgent practical questions about individualism and collectivism, using the most sophisticated theoretical tools available to progressive thought' - Lawrence Grossberg, Morris Davis Distinguished Professor of Media Studies & Cultural Studies at UNC, and author of Cultural Studies in the Future Tense (Duke University Press, 2010) 'Jeremy Gilbert is a master storyteller, reassembling critical traditions and opening up contemporary cases. In contrast to much theorising of the present, Common Ground honours the liveness and the conceptual vitality of the political: a necessity, in this exciting and terrifying contemporary moment' - Lauren Berlant, George M. Pullman Distinguished Service Professor, Department of English, University of Chicago
Preface
1. Postmodernity and the Crisis of Democracy
2. A War of All Against All: Neoliberal Hegemony and Competitive Individualism
3. Leviathan Logics: Group Psychology from Hobbes to Laclau
4. The State of Community Opened: Multitude and Multiplicity
5. The Non-Fascist Crowd: Individuation and Infinite Relationality
6. Feeling Together: Affect, Identity and the Politics of the Common
7. On the Impossibility of Making Decisions: Affect, Agency and the Democratic Sublime
Conclusions
Notes
Index
Published by Pluto Press in Nov 2013
Paperback ISBN: 9780745325316
eBook ISBN: 9781849649773

END_OF_DOCUMENT_TOKEN_TO_BE_REPLACED
Back to Top
X