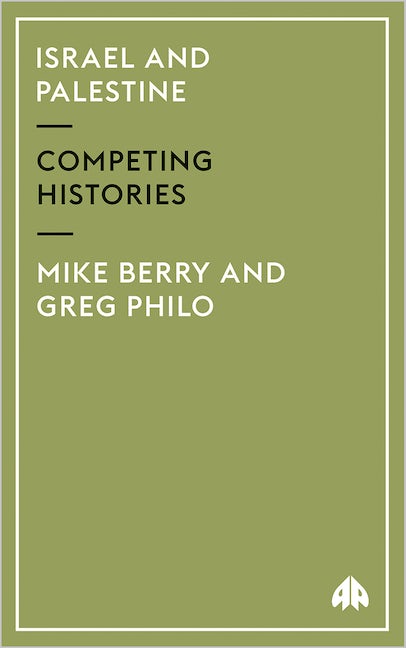 by Mike Berry and Greg Philo

A short introduction to the conflict that presents the arguments on both sides and summarises key thinkers from Said to Netanyahu
This is a concise guide to the Israel-Palestine conflict. There are many different, competing histories of the conflict, however, this book collects those which are based on the most considered historical research.

The book covers key events in chronological order, in each case examining the varied historical accounts and presenting the beliefs of key thinkers across the ideological spectrum, from Edward Said to Binyamin Netanyahu.

Starting the with emergence of the Zionist movement in the nineteenth century, and the figures who shaped it, the authors go on to cover the founding of Israel and its subsequent history, up to and including the 'roadmap for peace', the construction of the wall, the death of Arafat and the withdrawal from Gaza.

'Definitely a must for those who want a short introduction to the conflict. Even for those who are well versed in the events and issues involved, it is useful to have the whole history in such a short space' - Jordan Times 'A highly recommendable and much-needed brief introductory reading on the complex Palestinian-Israeli conflict' - Moshe Machover 'A key resource. The authors have produced a very readable, coherent and well-sourced account - giving both the Palestinian and Israeli viewpoints' - Palestine News
1. Peel Partition Plan, 1937
2. United Nations Partition Plan, 1947/9
3. The Near East After the 1967 June War
4. The Allon Plan, July 1967
5. Wye Memorandum, 1998 (Wye Accords map)
6. Projection of the West Bank Final Status Map, presented by Israel, Camp David, July 2000
7. Final Status Map presented by Israel, Taba, January 2001
8. The Wall in the West Bank, December 2003
Notes
References
Index
MAPS
Published by Pluto Press in Sep 2006
Paperback ISBN: 9780745325651
eBook ISBN: 9781783714919