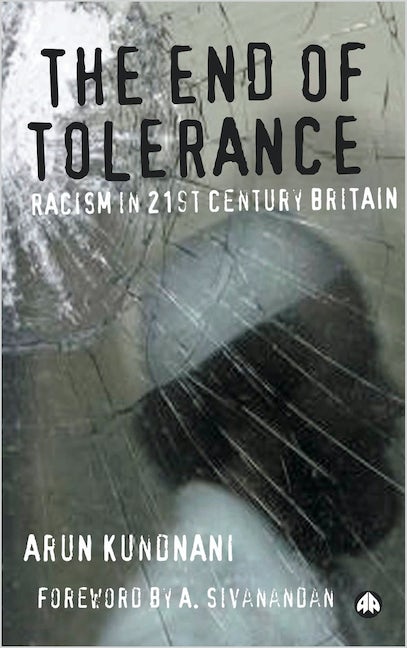 The End of Tolerance

Exacerbated by the attacks of 9/11 and 7/7, Kundnani argues that a new form of racism is emerging that is based on a systematic failure to understand the causes of forced migration, global terrorism and social segregation. The result is a climate of hatred, especially against Muslims and asylum seekers. Yet the government presses ahead with flawed policies and anti-terrorist legislation that creates further resentment, alienation and criminalisation.

What can be done? This timely and precise analysis is a useful account of why racism is now thriving - and what we can do to stop it.

Arun Kundnani is an Adjunct Professor of Media, Culture, and Communication at New York University, and teaches terrorism studies at John Jay College. He has been a Visiting Fellow at Leiden University, Netherlands, an Open Society Fellow, and the Editor of the journal Race and Class. He is the author of The End of Tolerance (Pluto, 2007) and The Muslims Are Coming! (Verso, 2014).

'Before you can solve a problem you have to understand it. Arun Kundnani not only understands the roots and ramifications of contemporary racism but explains it clearly, linking the local, the global, the political and the cultural. An incisive book at a decisive moment' - Gary Younge 'An illuminating analysis of the historic development of British racism, its empire and how this has evolved into the current conflicting and confused debates - An essential resource' - Herman Ouseley, former Chair of the Commission for Racial Equality 'Expertly dismantles the racism informing much of current political discourse on asylum, immigration and multiculturalism. A timely and important contribution to the struggle against racism that both new anti-racist activists and veterans alike will benefit from reading' - Councillor Salma Yaqoob, Vice-Chair of Respect 'Kundnani guides us through the history and origins of the nebulous forms of today's 'new' racism, placing economic and political exploitation back at the heart of the issue. An invaluable book for confusing times' - John Pandit, member of Asian Dub Foundation 'Cutting through the media-hyped public hysteria on issues around multiculturalism Kundnani has produced a highly accessible and valuable historical analysis of racism shaping contemporary policy-making' - Ruhul Tarafder, 1990 Trust 'A timely and useful critical approach to the contested issue of British multiculturalism' - Dr Sarita Malik, Department of Sociology and Communications, Brunel University
Acknowledgements
Foreword by A. Sivanandan
Introduction
1. Echoes of empire
2. From dependency to displacement
3. Seeds of segregation
4. We are here because you are there
5. Asylum and the welfare state
6. The dialectics of terror
7. The Halabja generation
8. Integrationism: the politics of anti-Muslim racism
9. Migration and the market-state
10. Here to stay
11. The new Leviathan
12. Community: theirs and ours
Notes to the text
Index
Published by Pluto Press in Jul 2007
Paperback ISBN: 9780745326450
eBook ISBN: 9781783715619