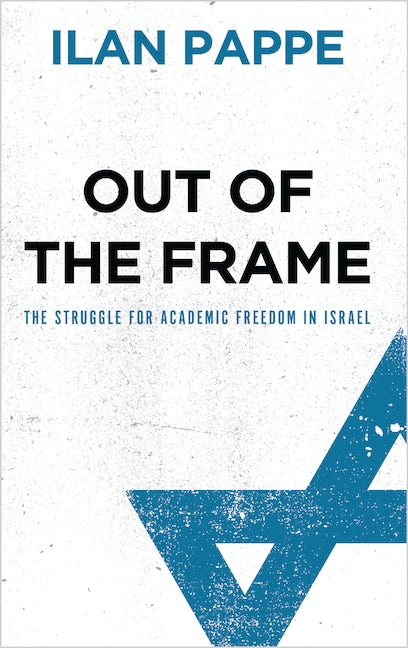 Out of the Frame

The Struggle for Academic Freedom in Israel

Bestselling author and historian Ilan Pappe tells the story of his struggle against the Israeli academy to reveal truths about the 1948 Nakbah.
Ilan Pappe has long been a controversial figure in Israel, here; he gives a full account of his break with mainstream Israeli scholarship and its consequences.

Growing up in a conventional Israeli community and influenced by the utopian visions of Theodor Herzl, Pappe was barely aware of the Nakba in his high school years. This intellectual biography traces his journey of discovery, from the whispers of Palestinian classmates, to his realisation that the 'enemy's' narrative of 1948 was correct, and his vow to protect the memory of the Nakba. For the first time he gives the details of the formidable opposition he faced in Israel, including death threats fed by the media, denunciations by the Knesset and calls for him to be sacked from his post at Haifa university.

This revealing work, written with dignity and humour, highlights Israel's difficulty in facing up to its past and forging a peaceful, inclusive future in Palestine.

Illan Pappe is Professor of History and Director of the European Centre for Palestine Studies at the University of Exeter. He is the author of numerous books, including Ten Myths About Israel (Verso, 2017), The Forgotten Palestinians (Yale University Press, 2013) and The Idea of Israel (Verso, 2012).

'A courageous, honest painful personal account of what goes on in Israel to silence dissent and to curb freedom of thought and expression' - Mariam C. Said 'In this long-awaited intellectual autobiography, Ilan Pappe, Israel's most important critical historian charts the real road map to Israel's ideological dismantling and to reconciliation with the Palestinians via the non-violent Boycott, Divestment and Sanctions campaign' - Ronit Lentin, Head of Sociology, Trinity College Dublin 'Pappe takes us through his own development from child of a solid zionist family into a historian in conflict with his own society's view of its past. He describes this intellectual and moral journey in the measured tone of an academic, but also with his customary humanistic sensitivity to the suffering so many ignore' - Allan Cameron, Writer and Translator 'In this remarkable intellectual history and autobiography, Ilan Pappe shows why he changed his mind from the Zionist consensus, and how he resisted Zionist pressure to deny his findings and his conscience. His work shines with steadfastness, humour, and hope' - Professor James Holstun, University of Buffalo, New York
Preface
Introduction
1. The Demons of the Nakbah
2. The Arming of the Zionist Mind
3. The Katz Affair
4. The Trial and the Acquittal
5. The Battle for the Historiography of 1948
6. The Home University
7. The Last Straw: Lebanon and Gaza
8. The Killing Fields of Gaza
Epilogue
Appendix
Index
Published by Pluto Press in Oct 2010
Paperback ISBN: 9780745327259
eBook ISBN: 9781783714209