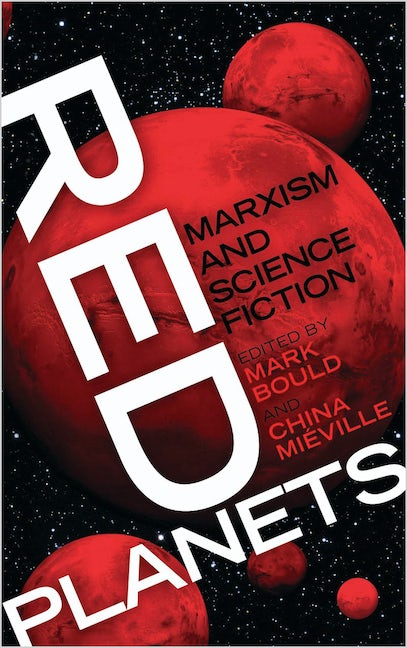 What connects Marxism and Sci-fi?

Science fiction and socialism have always had a close relationship. Many sf novelists and filmmakers are leftists. Others examine explicit or implicit Marxist concerns.

As a genre, sf is ideally suited to critiquing the present through its explorations of the social and political possibilities of the future. This is the first collection to combine analyses of sf literature and films within a broader overview of Marxist theory and critical perspectives on the genre.

Covering a rich variety of examples from Weimar cinema to mainstream Hollywood films, and novelists from Jules Verne and H.G. Wells to Kim Stanley Robinson, Ken MacLeod and Charles Stross, this is an indespensible insight into how Marxism and science fiction go hand-in-hand.

Mark Bould is Reader in Film and Literature at the University of the West of England. He is an advisory editor for Extrapolation, Historical Materialism, Paradoxa and Science Fiction Studies. He is the co-editor of The Routledge Companion to Science Fiction (Routledge, 2009) and Red Planets (Pluto, 2009).

China Mieville lives and works in London. He is three-time winner of the prestigious Arthur C. Clarke Award and has also won the British Fantasy Award twice. He is the author of October (Verso, 2017), The City and The City (Macmillan, 2011) Between Equal Rights (Pluto, 2006) and editor of Red Planets (Pluto, 2009).

'This collection marks a red shift in thinking about the history, form, and impact of science fiction literature and film. In robust dialectical manoeuvres, the essays, by a dynamic mix of scholars, simultaneously revive, critique, and transform the vibrant tradition of Marxist sf criticism. The book is a timely, readable, and incisive intervention in contemporary cultural critique' - Tom Moylan is Glucksman Professor of Contemporary Writing in English and Director of the Ralahine Centre for Utopian Studies at the University of Limerick.

'Shows what science fiction criticism can do when Marxist critical practice is joined by science studies and the rest of theory. The results are tremendously exciting and powerful, explaining not just a genre but our world' - Kim Stanley Robinson, author of the Mars trilogy

Introduction
Rough Guide to a Lonely Planet, from Nemo to Neo, by Mark Bould
Part One: Things to come
1. The Anamorphic Estrangements of Science Fiction, by Matthew Beaumont
2. Art as 'The Basic Technique of Life': Utopian Art and Art in Utopia in The Dispossessed and Blue Mars, by William J. Burling
3. Marxism, Cinema and Some Dialectics of Science Fiction and Film Noir, by Carl Freedman
4. Spectacle, Technology and Colonialism in Sf Cinema: The Case of Wim Wenders's Until the End of the World, by John Rieder
Part Two: When worlds collide
5. The Singularity is Here, by Steven Shaviro
6. Species and Species Being: Alienated Subjectivity and the Commodification of Animals, by Sherryl Vint
7. Ken MacLeod's Permanent Revolution: Utopian Possible Worlds, History and the Augenblick in the Fall Revolution quartet, by Phillip Wegner
Part Three: Back to the future
8. 'Madonna in moon rocket with breeches': Weimar sf film criticism during the stabilisation period, by Iris Luppa
9. The Urban Question in New Wave Sf, by Rob Latham
10. Towards a Revolutionary Science Fiction: Althusser's Critique of Historicity, by Darren Jorgensen
11. Utopia and Science Fiction Revisited, by Andrew Milner
Afterword
Cognition as Ideology: A Dialectic of Sf Theory, by China Miéville
Appendices
Left Sf: Selected and annotated, if not always exactly recommended, works
Critical and theoretical works
About the contributors
Index
Published by Pluto Press in Jul 2009
Paperback ISBN: 9780745327303
Hardcover ISBN: 9780745327310