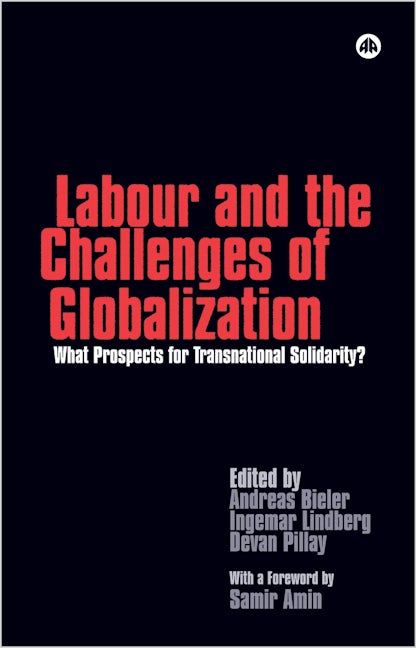 Labour and the Challenges of Globalization

What Prospects For Transnational Solidarity?

Neoliberal globalisation, the book argues, has created new forms of polarisation in the world. A renewal of working class internationalism must address the situation of both the more privileged segments of the working class and the more impoverished ones.

The study identifies new or renewed labour responses among formalised core workers as well as those on the periphery, including street-traders, homeworkers and other 'informal sector' workers.

The book contains ten country studies, including India, China, South Korea, Japan, Germany, Sweden, Canada, South Africa, Argentina and Brazil. It argues that workers and trade unions, through intensive collaboration with other social forces across the world, can challenge the logic of neoliberal globalization.

Andreas Bieler is Professor of Political Economy in the School of Politics and International Relations at the University of Nottingham. He is co-editor of Labour and the Challenges of Globalization (Pluto, 2008).

Ingemar Lindberg is a former trade unionist and senior researcher at the Swedish think-tank Agora. He is the co-editor of Labour and the Challenges of Globalization (Pluto, 2008).

Devan Pillay, a former trade unionist, is Associate Professor in Sociology, University of Witwatersrand, South Africa. He is co-editor of Labour and the Challenges of Globalization (Pluto, 2008).

'Breaks new ground by anchoring the response of labour to globalisation in the strategies of individual labour movements' - Eddie Webster, Professor of Sociology and Director of the Sociology of Work Unit at the University of the Witwatersrand in Johannesburg/South Africa. 'In an era when capital strikes back globally, old tools are not enough. New counter forces must be formed. The book makes an invaluable contribution to our understanding of the situation of the working class today' - Clas Linder, First Vice President, Swedish Transport Workers' Union.
Acknowledgements
List of Contributors
List of Tables
List of Figures
List of Abbreviations
Foreword: Samir Amin Rebuilding the unity of the 'labour front'
1. The Future of the Global Working Class: an introduction, by Andreas Bieler, Ingemar Lindberg and Devan Pillay
2. The Contested Politics of Gender and Irregular Employment: Revitalizing the South Korean Democratic Labour Movement, by Jennifer Jihye Chun
3. Globalisation and the informalisation of labour: the case of South Africa, by Devan Pillay
4. Globalization and Labour in India: Emerging Challenges and Responses, by Praveen Jha
5. How China's Migrant Labour is Becoming the New Proletariat by Wen Tiejun
6. The globalisation of capital and its impact on the world of formal and informal work: Challenges for and responses from Argentine unions, by Isabel Rauber
7. Neoliberal Policies, Labour Market Restructuring and Social Exclusion: Brazil's Working Class Response, by Kjeld Jakobsen and Alexandre de Freitas Barbosa
8. The Impact of Globalisation on Trade Unions: The Situation in Japan, by Wakana Shutô and Mac Urata
9. Challenges facing the Canadian Labour Movement in the context of globalisation, unemployment and the casualisation of labour, by Geoff Bickerton and Jane Stinson
10. German trade unions between neo-liberal restructuring, social partnership and internationalism, by Heiner Dribbusch and Thorsten Schulten
11. Swedish unions and Globalisation: labour strategies in a changing global order, by Andreas Bieler and Ingemar Lindberg
12. Building alliances between formal and informal workers: Experiences from Africa, by Ilda Lindell
13. European integration: a strategic level for trade union resistance to neo-liberal restructuring and for the promotion of political alternatives?, by Andreas Bieler and Thorsten Schulten
14. A Trade Union Internationalism for the 21st Century: Meeting the Challenges from Above, Below and Beyond, by Peter Waterman
15. What future strategy for the global working class? The need for a new historical subject, by Andreas Bieler, Ingemar Lindberg and Devan Pillay
Bibliography
Index
Published by Pluto Press in Feb 2008
Paperback ISBN: 9780745327563
eBook ISBN: 9781783719204