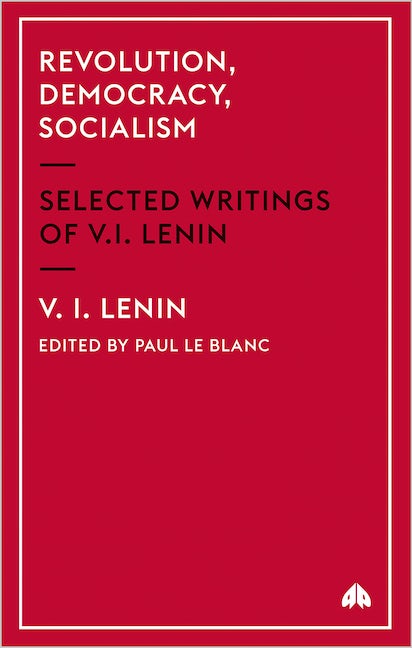 The first serious collection of Lenin's writings for decades. Editor Paul Le Blanc argues that Lenin was committed to democracy.
Part of Pluto's 21st birthday series Get Political, which brings essential political writing in a range of fields to a new audience.

This is an entirely new collection of Lenin's writing. For the first time it brings together crucial shorter works, to show that Lenin held a life-long commitment to freedom and democracy. Le Blanc has written a comprehensive introduction, which gives an accessible overview of Lenin's life and work, and explains his relevance to political thought today.

Lenin has been much maligned in the mainstream, accused of viewing 'man as modeling clay' and of 'social engineering of the most radical kind.' However, in contrast to today's world leaders, who happily turn to violence to achieve their objectives, Lenin believed it impossible to reach his goals 'by any other path than that of political democracy.'

This collection will be of immense value to students encountering Lenin for the first time, and those looking for a new interpretation of one of the 20th century's most inspiring figures.

V.I. Lenin (1870-1924) was a pivotal figure in twentieth century radical politics. He was a theoretician and the leader of the Russian Bolshevik Party. He wrote widely, authoring books such as Imperialism: The Highest Stage of Capitalism (Pluto, 1996). His selected writings were collected in the volume Revolution, Democracy, Socialism (Pluto, 2008).

Paul Le Blanc is a long-time activist and Professor of History at La Roche College, Pennsylvania. He is the author of many books, including Lenin and the Revolutionary Party, From Marx to Gramsci and The Living Flame: The Revolutionary Passion of Rosa Luxemburg.