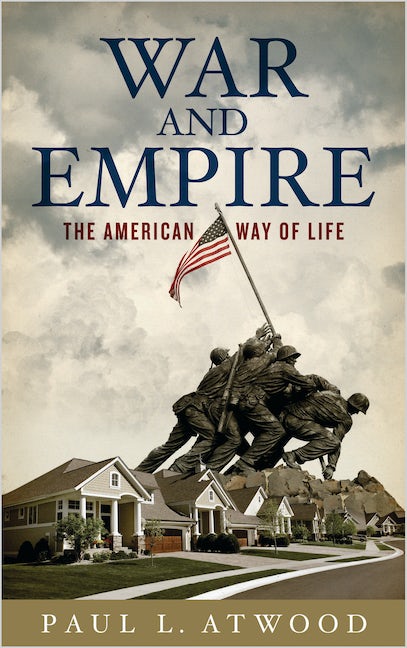 The American Way of Life

A study of US imperialism that argues America's leaders have chosen to go to war for influence and power ever since the declaration of independence.
American history is not often truthfully told. Dispelling the myths that have bolstered national myth making, Paul Atwood attempts to show Americans that their history is one of constant wars of aggression and imperial expansion.

From the declaration of Independence to present day, War and Empire takes a panoramic view of US military history, explaining US actions in every major war, from early combat with aboriginal nations, imperialist conflicts with Spain, to the war on terror. The book shows that, far from being dragged reluctantly into foreign entanglements, America's leaders have always picked its battles in order to increase their influence and power, with little regard for the American soldiers and 'enemy' civilians killed or made to suffer in the process.

This book is an eye-opening introduction to the American way of life for undergraduate students of American history, politics and international relations.

One of the original founders of the William Joiner Institute for the Study of War and Social Consequences at UMass-Boston, Paul Atwood served in the Marine Corps, and became active in antiwar efforts and veterans issues after discharge. He is retired from the faculty in the American Studies Department at UMass Boston. He edited the Joiner Center publication Agent Orange: Medical, Scientific, Legal, Political and Psychological Issues and recently co-edited Sticks and Stones: Living with Uncertain Wars. He contributes to the on-line journal Counterpunch. He is author most recently of War and Empire: The American Way of Life (Pluto, 2010).

Masterful ... gives us a panoramic view of American expansion, beginning with the first invasions of the continent and continuing to the present wars in the Middle East' - Howard Zinn, Professor Emeritus, Boston University, author of A People's History of the United States 'A clear-headed and compelling account of the development of the American empire, an invaluable corrective to standard myth-making accounts' - Marilyn Young, professor of History at New York University, author of Bombing Civilians: A Twentieth Century History (NY, the New press, 2009) and The Vietnam Wars 1945-1990 (NY, Harper, 1991). 'In this myth-busting book, Paul Atwood offers an impassioned and provocative challenge to all that Americans think they know about how the United States became a great power' - Andrew J. Bacevich, author of The Limits of Power: The End of American Exceptionalism
Acknowledgements
Preface
1. Introduction: American Ideology versus American Realities
2. By the Sword We Seek Peace
3. French, Indians, Rebellion and Repression
4. An Empire for Liberty?
5. From Ashes to Empire
6. War with Spain, then Another and Another
7. World War I:Making the World Safe for American Capital Investment
8. Pearl Harbor: The Spark but not the Cause
9. Cold War: The Clash of Ideology or of Empires?
10. Cold War/Hot War: Savage Wars of Peace?
11. War on Terror
12. Conclusion
Notes
Bibliography
Index
Published by Pluto Press in Jan 2010
Paperback ISBN: 9780745327648
eBook ISBN: 9781783715817