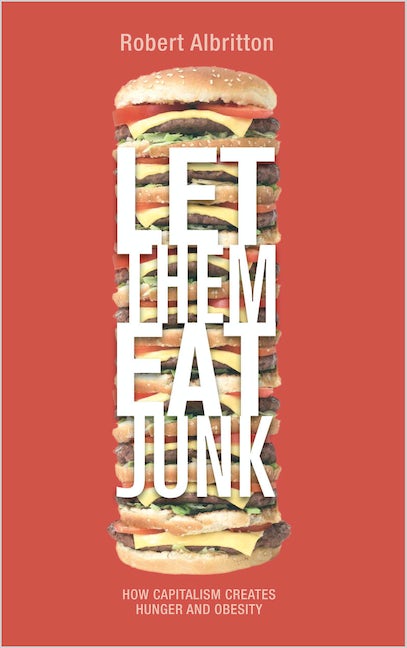 How Capitalism Creates Hunger and Obesity

How the capitalist system creates simultaneous hunger and obesity
This book to analyses the food industry from a Marxist perspective.

Let The Eat Junk argues that the capitalist system, far from delivering on the promise of cheap, nutritious food for all, has created a world where 25% of the world population are over-fed and 25% are hungry. This malnourishment of 50% of the world's population is explained systematically, a refreshing change from accounts that focus on cultural factors and individual greed. Robert Albritton details the economic relations and connections that have put us in a situation of simultaneous oversupply and undersupply of food.

This explosive book provides yet more evidence that the human cost of capitalism is much bigger than those in power will admit.

Robert Albritton is Professor Emeritus in the Department of Political Science at York University, Toronto, Canada. He has published seven books on Marxist theory, including Let Them Eat Junk (Pluto, 2009) and Economics Transformed (Pluto, 2009).

'Albritton speaks a language that has gone unheard for too long. Karl Marx felt that capitalism's focus on short-term profit was a recipe for disaster when it came to agriculture. Now Albritton shows that, in many ways, the old man was right' - Debora MacKenzie, New Scientist 'Pulls no punches in its analysis of the contradictions of 21st Century food systems' - Marion Nestle, Paulette Goddard Professor of Nutrition, Food Studies, and Public Health at New York University, author of Food Politics (2003) 'Marx understood the dynamics of the current food crisis over a century ago. Robert Albritton has written a fine primer, bridging the best thinking of the nineteenth century to the urgent needs of the twenty-first' - Raj Patel, author of Stuffed and Starved
Preface
Part I Introduction
1. Introduction
Part II Understanding Capitalism
2. The Management of Agriculture and Food by Capital’s
Deep Structures
3. The Phase of Consumerism and the US Roots of the
Current Agriculture and Food Regimes
Part III The Historical Analysis of the US-Centred
Global Food Regime
4. The Food Regime and Consumers’ Health
5. The Health of Agriculture and Food Workers
6. Agriculture, Food Provisioning and the Environment
7. Food, Marketing and Choice in the United States
8. Corporate Power, Food and Liberal Democracy
Part IV Conclusions
9. Agriculture, Food and the Fight for Democracy,
Social Justice, Health and Sustainability
Notes
Bibliography
Index
Published by Pluto Press in Mar 2009
Paperback ISBN: 9780745328065
eBook ISBN: 9781783713844