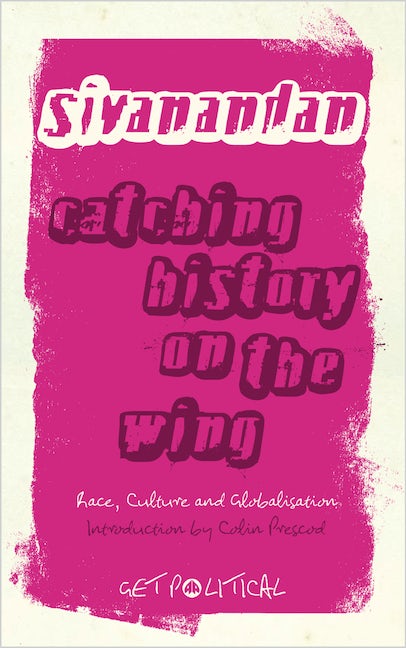 Catching History on the Wing

The definitive collection of A. Sivanandan's writing.

Part of Pluto's 21st birthday series Get Political, which brings essential political writing in a range of fields to a new audience.

A. Sivanandan is a highly influential thinker on race, racism, globalisation and resistance. Since 1972, he has been the director of the Institute of Race Relations and the editor of Race & Class, which set the policy agenda on ethnicity and race in the UK and worldwide. Sivanandan has been writing for over forty years and this is the definitive collection of his work.

The articles selected span his entire career and are chosen for their relevance to today's most pressing issues. Included is a complete bibliography of Sivanandan’s writings, and an introduction by Colin Prescod (chair of the IRR), which sets the writings in context.

This book is highly relevant to undergraduate politics students and anyone reading or writing on race, ethnicity and immigration.

Foreword by Colin Prescod
Introduction: Unity of struggle
I The personal and the political
1. The liberation of the black intellectual
2. The hokum of New Times
3. La trahison des clercs
II State racism and resistance
4. Race, class and the state: the political economy of immigration
5. From resistance to rebellion: Asian and Afro-Caribbean struggles in Britain
6. RAT and the degradation of black struggle
7. Race, terror and civil society+ addendum
III Globalisation and displacement
8. Imperialism and disorganic development in the silicon age
9. New circuits of imperialism
10. A Black perspective on the Gulf war
11. Poverty is the new black
Bibliography of writings by A. Sivanandan
Index
Published by Pluto Press in Sep 2008
Paperback ISBN: 9780745328348
eBook ISBN: 9781783715671