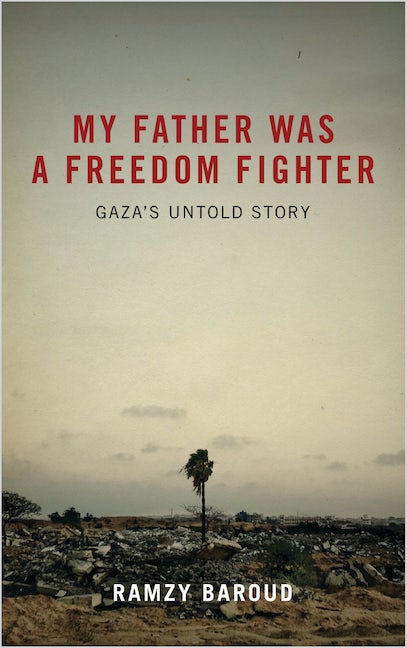 My Father Was a Freedom Fighter

A story of a family on the frontlines
This book is a personal account of the daily lives of the people of the frontline of the Palestine / Israel conflict, giving us an insight into the deadly, seemingly never-ending rounds of violence.

Ramzy Baroud tells his father's fascinating story. Driven out of his village to a refugee camp, he took up arms and fought the occupation at the same time raising a family and trying to do the best for his children.

Baroud's vivid and honest account reveals the complex human beings; revolutionaries, great moms and dads, lovers, and comedians that make Gaza so much more than just a disputed territory.

Ramzy Baroud is a journalist, media consultant, author and editor of the Palestine Chronicle. He is a Non-Resident Scholar at Orfalea Center for Global and International Studies, University of California Santa Barbara. He is the author of My Father Was a Freedom Fighter: Gaza's Untold Story (Pluto, 2009), and The Last Earth: A Palestinian Story (Pluto, 2018), among others books. He has a PhD in Palestine Studies from the University of Exeter.

'A deeply moving chronicle of the persisting Palestinian ordeal. This book more than any I have read tells me why anyone of conscience must stand in solidarity with the continuing struggle of the Palestinian people for self-determination and a just peace' - Richard Falk, Albert G. Milbank Professor of International Law Emeritus, Princeton University and Special Rapporteur for Occupied Palestinian Territories, UN Human Right Council 'This book should be read by all who struggle to understand the Middle East and to find passage to a just peace in the region' - Cindy and Craig Corrie, The Rachel Corrie Foundation 'Ramzy Baroud's sensitive, thoughtful, searching writing penetrates to the core of moral dilemmas that their intended audiences evade at their peril' - Noam Chomsky 'This is a very fine book: both a loving tribute to the author's father and the struggle and pain of Palestine seen through the witness and insights of two generations. Together, they beckon freedom' - John Pilger, award-winning journalist and documentary filmmaker. 'A gifted writer' - Salman Abu Sitta, author and historian, Founder and President of Palestine Land Society, London.
Acknowledgments
Foreword Dr. Salman Abu Sitta
Preface
Map
1. Happier Times
2. Born into Turmoil
3. Taking Flight
4. A World Outside the Tent
5. Lost and Found
6. Zarefah
7. Al-Naksa: The Setback
8. An Olive Branch and a Thousand Cans of Tomato Sauce
9. Strange Men at the Beach Casino
10. Intifada: … and All Hell Broke Loose
11. Oslo on the Line
12. The World as Seen From the Stone Staircase
13. Dying, Again
Notes
Selected Bibliography
Index
Published by Pluto Press in Dec 2009
Paperback ISBN: 9780745328812
eBook ISBN: 9781783714124