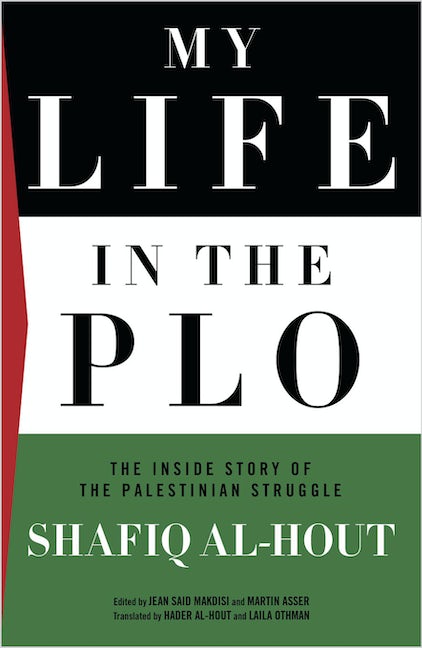 My Life in the PLO

The Inside Story of the Palestinian Struggle

For over three decades, the main goal of the PLO was to achieve a just peace in the Arab-Israeli conflict, and to build a democratic state in Palestine for all its citizens. Shafiq Al-Hout, a high ranking PLO official until his resignation in 1993, provides previously unavailable details on the key events in its history such as its recognition by the UN and the Oslo peace negotiations. Analysing and criticising decisions and individuals, including Yasser Arafat, we are taken right to the heart of the decision making processes; our eyes opened to the personalities and internal politics that shaped the PLO's actions and the Palestinian experience of the twentieth century.

An essential piece of history that sheds new light on the significance of the PLO in the Palestinian struggle for justice.

Shafiq Al-Hout was one of the leading figures of the PLO, from its foundation through to the Oslo Agreement. His autobiography is called My Life in the PLO: The Inside Story of the Palestinian Struggle (Pluto, 2010). He has written numerous articles, essays and books, including The Left and Arab Nationalism (1959), The Palestinian between Diaspora and State (1977) and Moments of History (1986). He lived in Beirut until his death in 2009.

Jean Said Makdisi is the sister of Edward Said. She is the editor of My Life in the PLO: The Inside Story of the Palestinian Struggle (Pluto Press, 2010).

Hader Al-Hout is the son of Shafia Al-Hout. He translated his father's autobiography, My Life in the PLO: The Inside Story of the Palestinian Struggle (Pluto, 2010).

'In this refreshingly unconventional chronicle of a half-century of Palestinian nationalism, tough-minded Shafiq al-Hout never flinches from talking truth to power' - Jonathan Randal, retired Washington Post Correspondent
List of Acronyms
Preface
1. Jaffa, My City
2. From Homeland to Exile
3. From Journalism to Politics
4. The Birth of the Palestine Liberation Organisation
5. The Factions Gain Control over the PLO
6. Jordanian-Palestinian Relations
7. Nasser As I Knew Him
8. Fratricidal Wars
9. The PLO at the United Nations
10. Palestine, Around the Globe
11. The Israeli Invasion of Lebanon
12. The Sabra and Shatila Massacre
13. After the Departure
14. The Mysterious Triangle
15. The Second Exodus From Lebanon
16. The Session that changed the Path
17. The Intifada of Stones
18. Return to the Executive Committee
19. No Final Solution without a Single Democratic Palestine
20. The Night of Abu Ammar’s Plane Crash
21. Resigning in Protest over the Oslo Agreement
22. After the Resignation
23. My Heart Rebels
24. Coming out of a Dark Abyss
Appendix: Photographs?
Index
Published by Pluto Press in Nov 2010
Paperback ISBN: 9780745328836
eBook ISBN: 9781783714223