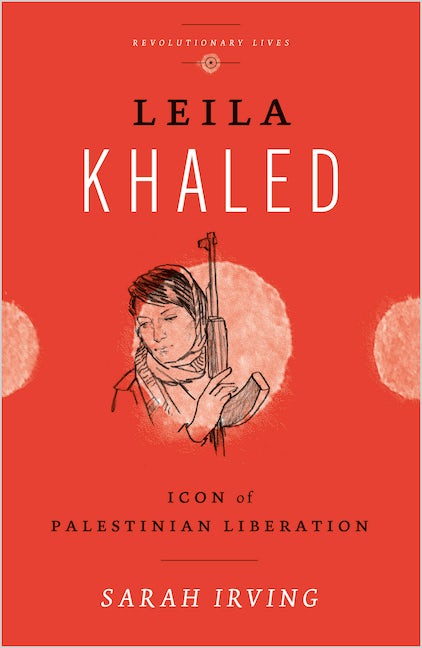 Compelling account of a legendary Palestinian resistance fighter: from refugee camp to international infamy
Dubbed 'the poster girl of Palestinian militancy', Leila Khaled's image flashed across the world after she hijacked a passenger jet in 1969. The picture of a young, determined looking woman with a checkered scarf, clutching an AK-47, was as era-defining as that of Che Guevara.

In this intimate profile, based on interviews with Khaled and those who know her, Sarah Irving gives us the life-story behind the image. Key moments of Khaled's turbulent life are explored, including the dramatic events of the hijackings, her involvement in the Marxist Popular Front for the Liberation of Palestine (a radical element within the PLO), her opposition to the Oslo peace process and her activism today.

Leila Khaled's example gives unique insights into the Palestinian struggle through one remarkable life – from the tension between armed and political struggle, to the decline of the secular left and the rise of Hamas, and the role of women in a largely male movement.

'A fine portrayal of a compelling and mysterious figure from a tumultuous period in Palestinian history, mixing biography and historical critique to deliver a valuable insight into Leila Khaled's character as well as her extraordinary appeal as a revolutionary icon' - Nicholas Blincoe, co-editor of Peace Under Fire: Israel/Palestine and the International Solidarity Movement
Introduction
1. Haifa, Lebanon, Kuwait
2. Leila The Fighter
3. Black September
4. Marriage And Death
5. Revolutionary Women
6. Moving To Jordan And Returning To Palestine
7. Leila Khaled In The Future, Palestine In The Future
References
Index
Published by Pluto Press in May 2012
Paperback ISBN: 9780745329512
eBook ISBN: 9781849646741

From hijacking planes, to her involvement in radical sects, Leila Khaled’s activism for the Palestinian cause made her as era-defining as Che Guevara. Sarah Irving sketches a biography of the revolutionary.

END_OF_DOCUMENT_TOKEN_TO_BE_REPLACED
Back to Top
X