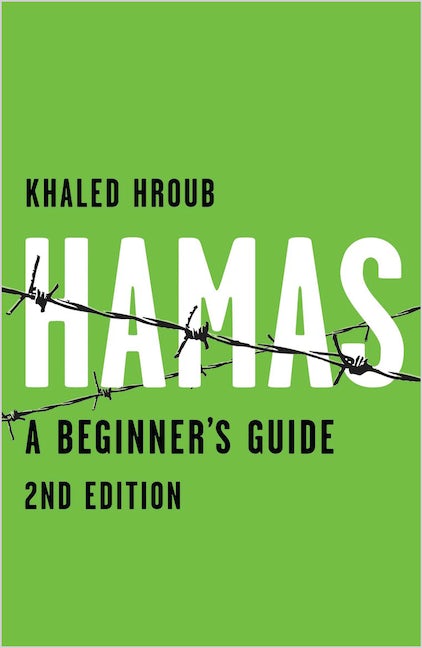 Acclaimed introduction to the Palestinian Islamist organisation in a simple Q&A format, fully revised and updated.
What is Hamas's history; its key beliefs; and its political agenda? From its' founding, following the First Intifada, to the 2008 Israeli Gaza offensive, Khaled Hroub writes this indispensable introduction to Hamas.

The book encompasses all major events, including the January 2006 elections, the ever-evolving relationship with Fatah, and the Gaza war, in addition to providing insight into Hamas's ideology by studying their charter, their socio-economic strategies and their outlook on Israel. Explaining the reasons for Hamas's popularity, Hroub provides the key facts often missing from news reports.

The reality of Hamas's victory means that the West will now have to engage with it more seriously if there is to be peace in the Middle East. This book provides the first essential step towards a better understanding of the challenges and surprises that the future may hold.

Khaled Hroub is a Palestinian, born into a refugee camp in Bethlehem. He is director of the Arab Media Project at Cambridge University and is the author of Hamas: A Beginner's Guide (Pluto, 2010).

'This short, timely introduction provides a history of the movement, a rundown of key policies and sketches of key figures' - Guardian 'This book could not be timelier. Drawing on his deep understanding of politics and religion in Palestine, Hroub expertly answers every important question about Hamas' - James Piscatori, Oxford Centre for Islamic Studies. 'A very useful summary of the Hamas movement's origins, evolution, and key positions. The book's question-and-answer format yields clear and concise positions, and Hroub deftly expands on these as he explains the nature of Hamas' discourse on resistance, its views of Israel, what he sees as religious and nationalistic currents in Hamas, the problematic language of its Charter, association with suicide bombings, and the impact on Palestinians of Fatah's and Hamas' polarisation' - CHOICE
Introduction to second edition
1. Hamas’s history
Islamism and the Palestinian struggle
The Muslim Brotherhood: the roots of Hamas
The formation of Hamas
2. Hamas’s ideology and objectives
The definition of Hamas, its ideological drive and worldview
Hamas Charter
Hamas: a national liberation movement or a religious movement
3. Hamas and Israel and Judaism
Hamas’s view of the Jews
Hamas’s view of Israel
4. Hamas’s resistance and military strategy
Forcing unconditional Israeli withdrawal
Suicide attacks
5. Hamas’s political and social strategy
Grassroots social work
Elections, democracy and mobilisation
Hamas’s economic outlook
6. Hamas and Fatah and the Palestinians
Hamas’s popularity
Hamas, the PLO and the Palestinian Left
Hamas and Fatah
Hamas and the Palestinian Christians
7. Hamas and ‘International Islamism’
Hamas and Muslim countries
Hamas and Muslim communities in the West
Hamas and Islamist movements
8. Hamas and the West
Hamas and the West
Hamas and the United States
Hamas and Europe
9. Hamas’s Leadership and Structure
Leadership
Hamas’s Charter
10. A New Hamas?
Hamas and the 2006 elections
The significance of Hamas’ victory
11. Hamas in Power
The mixed fortunes of Hamas in power
The mixed fortunes of Hamas in power-sharing and controlling
12. The future of Hamas
13. Hamas and Gaza War 2008/9
Hamas and the causes of the war
What Hamas gained and lost of the war
Hamas’ regional standing after the war
Index
Published by Pluto Press in Jul 2010
Paperback ISBN: 9780745329727
eBook ISBN: 9781783714667