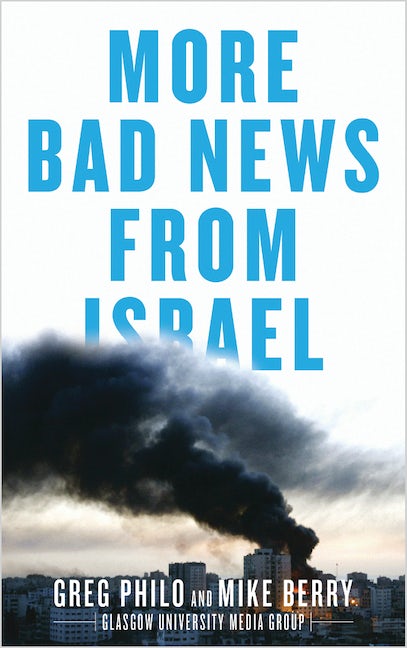 by Greg Philo and Mike Berry

The book brings together senior journalists and ordinary viewers to examine how audiences understand the news and how their views are shaped by media reporting. In the largest study ever undertaken in this area, the authors focus on television news. They illustrate major differences in the way Israelis and Palestinians are represented, including how casualties are shown and the presentation of the motives and rationales of both sides. They combine this with extensive audience research involving hundreds of participants from the USA, Britain and Germany. It shows extraordinary differences in levels of knowledge and understanding, especially amongst young people from these countries.

Covering recent developments, including the Israeli attacks on Lebanon and Gaza, this authoritative and up-to-date study will be an invaluable tool for journalists, activists and students and researchers of media studies.

'This superb study ... is extensive in scope, and scrupulously fair. It will be a landmark' - Edward S. Herman, co-author (with Noam Chomsky) of Manufacturing Consent 'Coverage of the Israeli-Palestinian conflict is often dangerously superficial. Bad News from Israel is a strong contribution to scholarship and public debate' - John D.H. Downing, Director, Global Media Research Center, Southern Illinois University 'Just about everything that we know about Israel/Palestine comes to us from our television screens. Bad News from Israel reveals remarkable levels of ignorance about what and why things are as they are' - Professor Frank Webster, City University, London 'A remarkable book' - Professor Lucrecia Escudero Chauvel, Université de Lille III and Paris VIII
Acknowledgments
Introduction
Final Status map
1. Histories of the Conflict
2. Content Studies 2000-2002
3. Audience Studies 2001-2002
4. Why Does it Happen?
5. Conclusions on the 2000-2002 Content and Audience Samples
6. News Content and Explanations of the 2008-9 Gaza Attack
7. Audience Understanding of the Israeli Palestinian Conflict and the Gaza Attack 2008-9
8. The Attack on the Gaza Flotilla, 2010
9. Conclusions
Appendices
Notes
References
Index
Conclusions
Appendices
Notes
References
Index
Published by Pluto Press in Apr 2011
Paperback ISBN: 9780745329789
eBook ISBN: 9781783710751