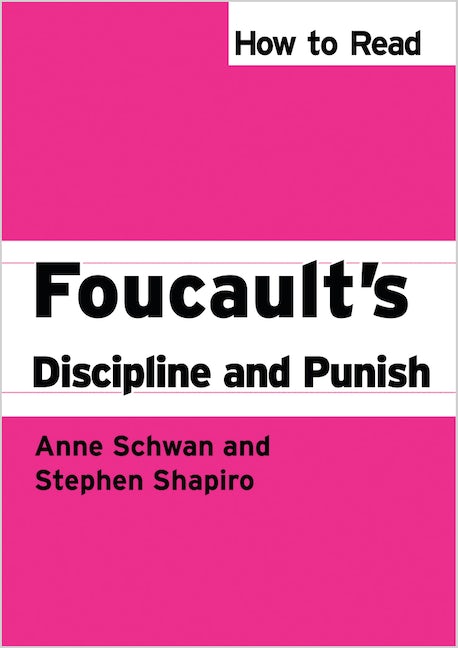 How to Read Foucault's Discipline and Punish

by Anne Schwan and Stephen Shapiro

Series: How to Read Theory

A step-by-step guide to reading Foucault's hugely influential text
Michel Foucault’s Discipline and Punish is one of the best-selling works of critical theory and a key text on many undergraduate courses. However, it is a long, difficult text which makes Anne Schwan and Stephen Shapiro's excellent step-by-step reading guide a welcome addition to the How to Read Theory series.

Undergraduates across a wide range of disciplines are expected to have a solid understanding of Foucault's key terms, which have become commonplace in critical thinking today. While there are many texts that survey Foucault's thought, these are often more general overviews or biographical précis that give little in the way of robust explanation and discussion.

In contrast, Schwan and Shapiro take a plain-speaking, yet detailed, approach, specifically designed to give students a thorough understanding of one of the most influential texts in contemporary cultural theory.

Anne Schwan is Associate Professor in English Literature at Edinburgh Napier University. She is a member of the Royal Society of Edinburgh's Young Academy of Scotland and a Fellow of RSA. She is the co-author of How to Read Foucault's Discipline and Punishment (Pluto, 2011).

Stephen Shapiro is Professor of American Literature at the University of Warwick. He is the author of How to Read Marx's Capital (Pluto, 2008) and How to Read Foucault's Discipline and Punishment (Pluto, 2011).

'A useful and illuminating companion to Foucault's book, and will clarify much that remains puzzling about this proteiform thinker, dispelling misunderstandings and sending the reader on new and more fruitful paths' - Fredric Jameson, William A. Lane Jr. Professor of Comparative Literature at Duke University '[A] highly readable guide to one of Foucault's best-known but often misinterpreted works' - Clare O'Farrell, author of Michel Foucault (2005) and founding editor of Foucault Studies 'An excellent aid to Foucault's classic text' - Professor Keith Ansell-Pearson, Department of Philosophy, University of Warwick
Rationale
Overview
Note on Translation
Part One: Torture
1. The Body of the Condemned
2. The Spectacle of the Scaffold
Part Two: Punishment
1. Generalised Punishment
2. The Gentle Way in Punishment
Part Three: Discipline
1. Docile Bodies
2. The Means of Correct Training
3. Panopticism
Part Four: Prison
1. Complete and Austere Institutions
2. Illegalities and Delinquency
3. The Carceral
Suggestions for Further Reading
Index
Published by Pluto Press in Jul 2011
Paperback ISBN: 9780745329802
eBook ISBN: 9781783710836