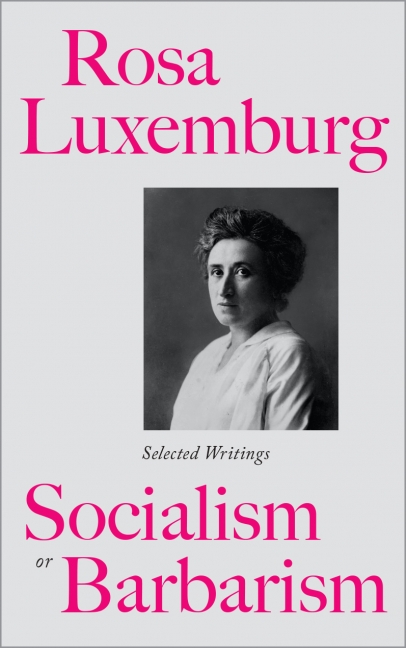 The best introduction to the range of Rosa Luxemburg's thought, including a number of writings never before anthologised.
Rosa Luxemburg's writings reveal one of the most brilliant and passionate minds drawn to the revolutionary socialist movement. Through the letters, pamphlets and theorising, we see an outstanding social and economic theorist, a dedicated political activist and a devoted confidant.

Providing an extensive overview of her writings, this volume contains a number of items never before anthologised. Her work was broad in scope tackling capitalism and socialism; globalisation and imperialism; history; war and peace; social struggles, trade unions, political parties; class, gender, race; the interconnection of humanity with the natural environment. The editors provide an extensive and informative introduction outlining and evaluating her life and thought.

This is the most comprehensive introduction to the range of Rosa Luxemburg's thought.

Rosa Luxemburg (1871-1919) was a Marxist theorist, philosopher and economist. One of the most brilliant minds drawn to the revolutionary socialist movement, she was a dedicated political activist, she proved willing to go to prison and even give her life for her beliefs. Her selected works are collected in Rosa Luxemburg: Socialism or Barbarism (Pluto, 2010).

Helen C. Scott is Associate Professor of English at the University of Vermont. She is the editor of Rosa Luxemburg: Socialism or Barbarism (Pluto Press, 2010) and author of Caribbean Women Writers and Globalization (Routledge, 2006).

Paul Le Blanc is a long-time activist and Professor of History at La Roche College, Pennsylvania. He is the author of many books, including Lenin and the Revolutionary Party, From Marx to Gramsci and The Living Flame: The Revolutionary Passion of Rosa Luxemburg.

Paul le Blanc has been an auto worker, health care worker, social service worker and dish washer, before spending over 30 years as a Professor of History, the last 22 years at La Roche University. He has written extensively on the history of the labor and socialist movements of the United States and Europe, including a number of works on Lenin and others active in Russia’s revolutionary struggles. He is currently a member of the editorial board overseeing the publication of the complete works of Rosa Luxemburg (for which he helped to edit volumes 2 and 5).

'Here, at last, in a single volume is an accessible introduction to one of the most important radical political thinkers of the 20th century with analysis and insight for a new generation of activist' - Elaine Bernard, Executive Director of the Labor and Worklife Program, Harvard Law School
Introduction by Helen C. Scott and Paul Le Blanc
Sources, Further Reading, Acknowledgements
1. The French Revolution
2. Reform or Revolution
3. Eight Hour Day – How to Win Reforms
4. Stagnation and Progress of Marxism
5. Organisational Questions of Russian Social Democracy
6. Socialism and the Churches
7. The Mass Strike, the Political Party, and the Trade Unions
8. Blanquism and Social Democracy
9. The National Question
10. Theory and Practice,
11. Women’s Suffrage and Class Struggle
12. Lassalle’s Legacy
13. The Accumulation of Capital –An Anti-Critique
14. The Crisis of German Social Democracy (Junius Pamphlet)
15.Two Prison Letters to Sonya Liebknecht
16. The Russian Revolution
17. Founding Convention of the German Communist Party
18. Order Prevails in Berlin
Index
Published by Pluto Press in Sep 2010
Paperback ISBN: 9780745329888
eBook ISBN: 9781783710799