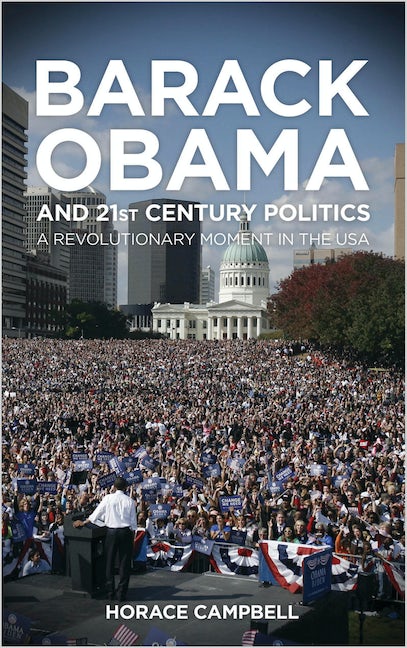 A Revolutionary Moment in the USA

An essential guide to the new political moment indicated by the new networks created in Barack Obama's revolutionary election campaign.
Barack Obama has been called a transformative and transcendental political figure, this book shows us just how significant the movement behind him was in reshaping the politics of the United States.

Horace Campbell examines the networks that made the 2009 electoral victory possible and discusses the importance of self-organization and self-emancipation in politics. Developing a theory of politics that starts with the humanist principles of Ubuntu, and draws in ecological, spiritual, anti-racist and anti-sexist principles, Campbell suggests we move away from old forms of vanguardism, reconceptualising political organisation, and recognising that new social forces are at play.

Horace G. Campbell teaches at Syracuse University in New York. He has been involved in the peace and justice movements for decades. He is the author of Barack Obama and Twenty-First-Century Politics (Pluto, 2010) and Rasta and Resistance From Marcus Garvey to Walter Rodney (Hansib, 2007).

'Helps us recognise that we are living in a revolutionary moment' - Grace Lee Boggs is a Chinese-American author, anti-racism activist and feminist. She is known for her years of political collaboration with C. L. R. James and Raya Dunayevskaya in the 1940s and 1950s. She eventually went off in her own political direction 'A bracing reminder of all the threads of history woven into this extraordinary moment, a warning about the military and financial forces trying to keep things as they are, and an inspiration to work for the very different world that could be within our grasp' - Adam Hochschild is an American writer and journalist. He worked as a writer and editor for the left-wing Ramparts magazine. In the mid-1970s, he was one of the co-founders of Mother Jones. Among his many books is King Leopold's Gjost A Story of Greed, Ter 'A provocative new perspective on the United States' first Black president. The book is a 'must read' for those interested in Black American and American politics and the shifting global realities of the 21st century. It is sure to spark animated debate' - Barbara Ransby, Associate Professor of African American Studies and History, University of Illinois–Chicago 'Probes the campaign of Barack Obama and finds a revolutionary potential vested in the use of new strategies and in its agenda for progressive social, economic and political change that would be historic if successfully affected in governance and accepted by a society truly ready for change' - Ronald W. Walters, former Director of the African American Leadership Institute of Government and Politics, University of Maryland, College Park 'A terrific addition to the current literature on this topic' - Dr Ian Scott, Senior Lecture in American Studies, University of Manchester
Acknowledgements
Foreword
Preface
Introduction
1. Revolutionary Moments and Ruptures
2. The Political Training of Barack Obama
3 Confronting Racism and Sexism in US Politics
4. Grassroots Organizing Confronts the Machine
5. Fractal Wisdom and Optimism in the Primary Campaign of 2008
6. Between the Past and the Future: The Democratic National Convention
7. Ground Operation for Victory: Challenging the Ruthlessness of the Wounded Corporate Bankers
8 Beyond Messiahs: Networks for Peace and Transformation in the 21st Century
9. Ubuntu and 21st Century Revolution
Notes
Index
Published by Pluto Press in Aug 2010
Paperback ISBN: 9780745330068