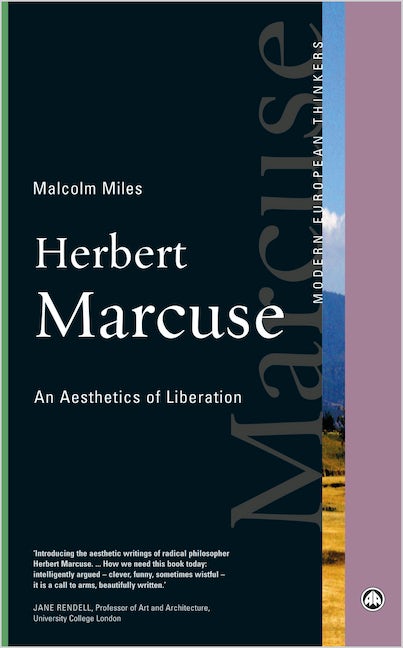 An Aesthetics of Liberation

An introduction to the ideas of a thinker who greatly influenced the 1960s protest movements
When capitalism is clearly catastrophically out of control and its excesses cannot be sustained socially or ecologically, the ideas of Herbert Marcuse become as relevant as they were in the 1960s. This is the first English introduction to Marcuse to be published for decades, and deals specifically with his aesthetic theories and their relation to a critical theory of society.

Although Marcuse is best known as a critic of consumer society, epitomised in the classic One-Dimensional Man, Malcolm Miles provides an insight into how Marcuse's aesthetic theories evolved within his broader attitudes, from his anxiety at the rise of fascism in the 1930s through heady optimism of the 1960s, to acceptance in the 1970s that radical art becomes an invaluable progressive force when political change has become deadlocked.

Marcuse's aesthetics of liberation, in which art assumes a primary role in interrupting the operation of capitalism, made him a key figure for the student movement in the 1960s. As diverse forms of resistance rise once more, a new generation of students, scholars and activists will find Marcuse's radical theory essential to their struggle.

Malcolm Miles is Professor of Cultural Theory at the University of Plymouth. He is the author of Herbert Marcuse: an Aesthetics of Liberation (Pluto, 2011) and Limits to Culture (Pluto, 2015).

'Goes back to Marcuse's work on aesthetics to link philosophy, art, history, political analysis, and sociological insights in a deeply humane search for the way to a better world. It deserves a very wide readership' - Peter Marcuse (with obvious bias). 'A comprehensive critical overview and an interrogation of Marcuse's writings on art and aesthetics' - Douglas Kellner, UCLA, author of Herbert Marcuse and the Crisis of Marxism and Media Spectacle and the Crisis of Democracy 'Introducing the aesthetic writings of radical philosopher Herbert Marcuse, cultural theorist Malcolm Miles explores the role the imagination plays for Marcuse in political transformation, offering us the hope of a horizon to neoliberal capitalism's treachery' - Jane Rendell, Professor and Vice Dean of Research, The Bartlett, UCL, and author of Site-Writing (2010), Art and Architecture (2006) and The Pursuit of Pleasure (2002).
Introduction
1. Aesthetics and the Reconstruction of Society
2. The Artist and Social Theory
3. Affirmations
4. A Literature of Intimacy
5. Society as a Work of Art
6. The End of Utopia
7. The Aesthetic Dimension
8. Legacies and Practices
Notes
Index
Published by Pluto Press in Dec 2011
Paperback ISBN: 9780745330389
eBook ISBN: 9781783714995