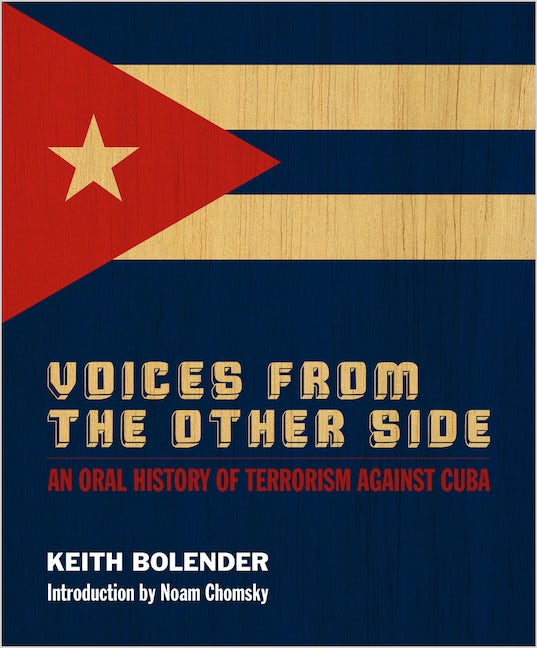 Voices From the Other Side

An Oral History of Terrorism Against Cuba

Shows the enormous impact that terrorism, often US-backed, has had on Cuban civilians. Includes many interviews with victims and their families.
Since the early 1960s, few other countries have endured more acts of terrorism against civilian targets than Cuba, and the US has had its hand in much of it. This book gives a voice to the victims.

Keith Bolender reveals the enormous impact of terrorism on Cuba's civilian population, with over 1,000 documented incidents resulting in more than 3,000 deaths and 2,000 injuries. Bolender allows the victims to articulate the atrocities the Cuban people have suffered - which largely originate from Cuban counter-revolutionaries based in the US, often with the active help of the CIA.

With first-person interviews from more than 75 Cuban citizens who have been victims of these terrorist acts, or have had family members or close friends die from the attacks, this is a unique resource for activists, journalists and students interested in Cuba's tumultuous relationship with the US.

Keith Bolender is a freelance journalist who worked for more than 10 years with the Toronto Star. He is the author of Voices From the Other Side: An Oral History of Terrorism Against Cuba (Pluto, 2010). He is a member of the Institute for Public Accuracy on their Roster of Experts for Cuban Affairs, and lectures at the University of Toronto School of Continuing Studies.

'Since 1960, successive US administrations have waged an aggressive illegal war against Cuba, the human toll of which has long been ignored. Bolender's book corrects this ignorance, offering a true people's history of perseverance. Highly recommended' - Greg Grandin, Professor of History at New York University and author of Empire's Workshop: Latin America, the United States, and the Rise of the New Imperialism (2006). Counter-narratives are always welcomed: a way to develop new perspectives and challenge old perceptions. Voices From the Other Side is especially timely, for it turns the prevailing paradigm of terrorism on its head: in this instance, Cuba as object of a policy of sanctions, subversion, and sabotage as experienced in the daily lives of the Cuban people. - Louis A. Pérez, Jr, University of North Carolina at Chapel Hill
Acknowledgement
Introduction by Noam Chomsky
1. The Unknown War
2. Cubana Airlines
3. Hotel bombings
4. Operation Peter Pan
5. Biological terrorism
6. Boca de Samá
7. Caibarién and the Fishermen
8. Literacy Campaign
9. Cine Mobile
10. La Coubre
11. Department Stores
12. Pinar Del Rio cinema
13. The Cuban national identity
14. The Cuban Five
Notes
Index
Published by Pluto Press in Jul 2010
Paperback ISBN: 9780745330402
eBook ISBN: 9781783710942